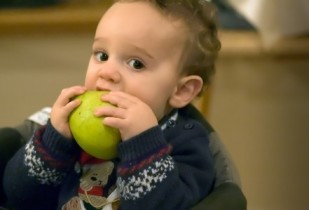 I have discovered the secret of saving money feeding babies, toddlers and preschoolers. Well, I can’t take the credit for it. My mom taught it to me many years ago but I didn’t put it into practice until the first financial crisis we had when my husband was laid off.

What I have been practicing now for many years has now become one of the new buzz phrases — “portion control”. Usually when we think of portion control it is in connection with dieters and not young children or saving money.

Most American parents serve themselves and their children huge portions of food. Their families eat only part of it, and then they discard the rest. Next time you scrape those half eaten plates of food into the trash, think about this: 30% to 50% of the food and drinks we buy, whether we eat at home or out, get thrown away. That means if you are paying $500 per month on groceries, you are throwing $250 in the trash each month. If you don’t believe it’s true, observe your own family this week. How many half full bowls of soggy cereal do you throw away? How many pieces of toast get tossed only half eaten? What about half empty glasses of juice, milk or pop? With young children this is usually worse, but adults often do it too.

It is easy to forget that children under the age of four have only about a quarter of an adult’s body weight. Often, we feed them adult portions and when we do give them smaller portions, each portion is usually only reduced to about half an adult portion. Do you use that large serving spoon and dump a full spoon of food on your child’s plate? Say you give yourself two spoons of green beans and your child one– That means that you have given yourself about 24 green beans and your child 12 when in reality, that child needs only about six.

Many parents wonder why small children resist eating everything on their plates. What if you were given double portions at every meal? When parents press kids to keep eating when they are full, they inadvertently encourage obesity. It is no wonder that we then end up throwing away half of the food left on their plates. When deciding how much food to give your kids, start small and work your way up. Remember, if they eat what is on their plates you can always give them more. If they consistently ask for seconds, then increase their portions.

Use the same method for drinks. Even a small sippy cup should only be filled half full. This not only reduces the amount that you throw away, but also reduces the losses from spills. I once heard a mom say she always bought two gallons of milk instead of just one. One gallon was for the kids to drink and the other was for them to spill.

Another great way to save a lot of money is to give children more water. In addition to serving children overly large portions, failing to give them enough water leads to obesity. At this point, many parents point out that young children need lots of milk and juice. That is true to a degree, but consider this: The USDA recommends 12 oz of milk per day for children under 4. That is equal to two sippy cups. Before you fill those two sippy cups, remember that kids get milk from other sources too, including milk with their cereal and cheese on their sandwiches. Ask any doctor and he will tell you most people are not getting enough water.

It is easy to think that if something is good for us then even more is better. That isn’t always true. Fertilizer helps our lawns grow, but too much fertilizer can kill the same grass we are feeding. The same rule applies to feeding our children. We think the more juice and milk they get the better, but once kids have had as much as they need nutritionally, the rest just adds calories. Just as with adults, feeding kids too much leads to all kinds of health problems including obesity and diabetes. It also encourages them to develop bad eating habits that get more severe as they get older.

If you are ready to cut the waste from your food budget, here are a few more tips to save money and make your life easier:

For more tips to help you save money on kids’ expenses, check out our Saving With Kids e-books.