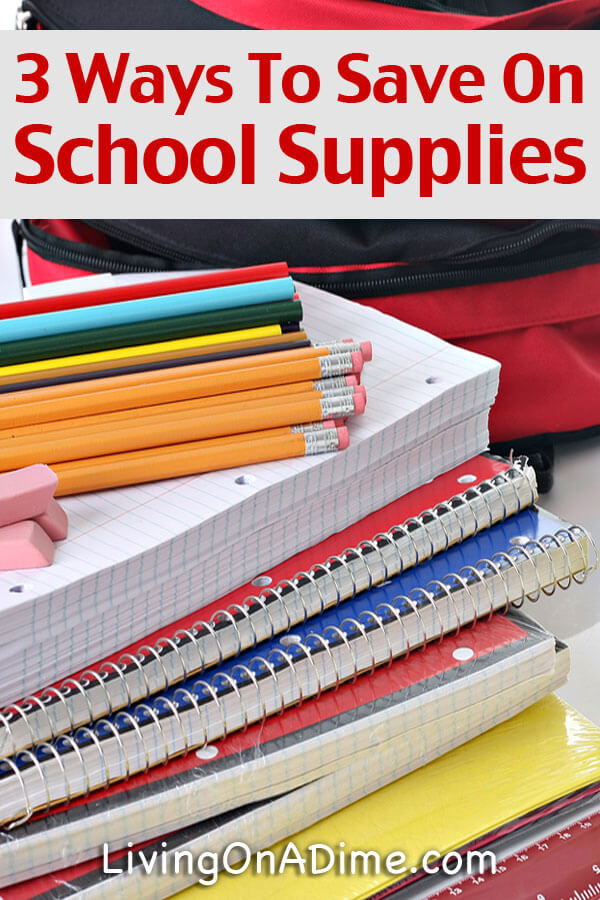 Save Money on School Supplies

I walked into Wal-Mart today and saw her standing there: a mom. She had two children sitting in her shopping cart, one walking beside it and another clinging to her leg. She had the look of a battle weary soldier, with her feet dragging and her shoulders slumped. Child #1 was punching child #3. Child #2 was begging for a toy and child #4 was doing the “potty dance”.

As she approached the main aisle of the store she looked up and saw the display there. Her face lit up. She smiled and straightened her shoulders. There was joy and hope shining from her like I had never seen before.

You may ask “What was on that display that caused this mom to break forth in song singing, “Oh, What a Beautiful Morning?” Was it spectacular jewelry or the latest in designer dresses? Oh, no no no! It was school supplies! For decades, moms everywhere have eagerly awaited the day when that first box of crayons and pack of notebook paper make their appearance.

For many, though, the first reaction of joy about school supplies is quickly followed by a second reaction of pure dread. “How am I going to pay for all of this?” I sat last year and watched as a TV news reporter asked person after person at one store how much they had just spent for back to school supplies. I was shocked at the amount of money people were spending. I couldn’t figure out what was going on. How could it cost $1000 for school supplies? Yes, you heard it right — $1000.

So what was the problem with the people on the news? Suddenly I noticed something interesting. Each person’s shopping cart wasn’t full of school supplies, it was full of clothes, shoes, and the latest in aerodynamic backpacks, some of which cost nearly as much as the first car my husband and I bought.

If you find that back to school preparation throws your finances out of balance, try these tips to help bring school supplies costs back within your budget:

Thank you for your advice about back to school supplies & buying school clothes. I had already purchased perfectly good clothes for my daughter this summer at garage sales, but like many others, was planning on buying “school clothes”. Why? I don’t know, because it’s just been one of those things people do without even considering why.

When I read that, it was like a lightning bolt – of course, if the clothes she’s been wearing are in good condition, why go & buy more just because school is starting? You saved us a good deal of money, I’m sure, as well as many others who read this advice. It’s all about changing the way we think about things – that’s the real key to saving money. Thanks again!

Back to School Spending

Easy Finger Paints Recipe – How To Make Finger Paint
Previous article: How to Stop Worrying
Next Post: How To Get Rid Of Dust Mites