Most people spend around $200 for kids’ birthday parties, but is that necessary? Here’s how to have a cheap birthday party your kids will love for just $20! 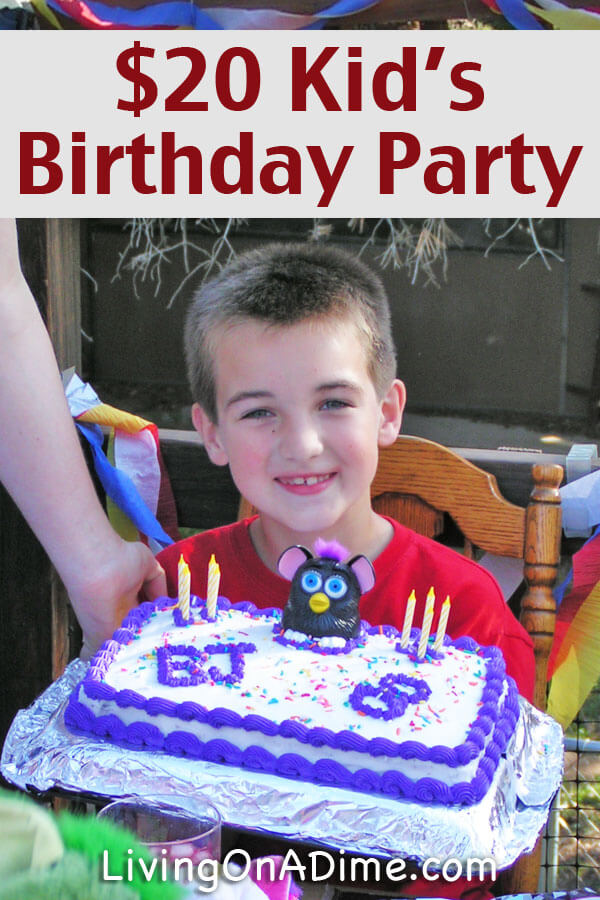 Corlin writes: I have a daughter who is turning 5 this month and I usually spend too much on the whole thing. Do you have any suggestions on how to cut the cost? We are having the birthday party at home this year. I plan to make cheese and crackers and veggie and fruit platters. Any other short cuts?

Tawra: We keep our kids’ birthday parties simple. We usually only provide cake and ice cream for food and Kool-aid for drinks. We also limit the number of kids to between 5-7 friends if a lot of family will be there so we don’t have more than 15 people with family. We didn’t have parties with friends from school until our son turned eight and our daughter turned seven. Prior to that, we only had family parties.

It is helpful if there are several adults present to make sure everything goes smoothly. We usually have one adult working on cake, another re-filling punch and possibly another just making sure the kids are doing well.

Here are some details of our first two kids’ birthday parties with their school friends: 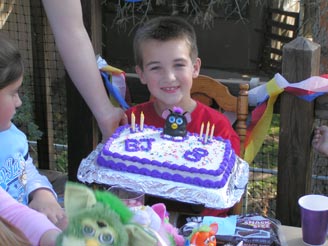 This was the first party I’ve thrown for one of the kids. It ended up being really nice and I learned some things too!

First, we sent out invitations but no one called. I had to call everyone and they all said they were coming. I’m glad I called because I would have expected no one to show up!

One kid brought his sibling (The mom didn’t tell me she planned to bring him). I now know to buy extra party favors. Mike asked me if I had prepared for a few extra kids and I said no because I didn’t think everyone would show up. Sometimes you have to improvise. We ended up telling our kids and my niece and nephew that we would give them something else later.

For party favors I bought some bags of fall Hershey’s kisses on clearance for $1.30 each. We had a treasure hunt and the bags of kisses were sitting in a basket at the end of the treasure hunt trail. (If you live in a hot climate like we do, this is not the time of the year for chocolate waiting for kids to find it outside!)

About the treasure hunt: We made ten clues that sent them running all over the place. We have a half acre yard and we sent them from the back of the lot over to the neighbor’s house two houses away, about a half block back and forth. That was way too much. We made 10 clues and they were completely worn out from running so much. Some had to sit down and rest before they were done. Next time I will make 10 clues, but have them clustered closer together so that they follow clues between the front and back yard only. Even though they were tired, they still loved it!

We made a pin the tail on the Furby game and played “Furby Says” (“Simon Says” with a Furby theme ;-). I drew a Furby and painted it on brown paper that I had. Then we cut out tails out of white paper and put the kid’s names on them. They enjoyed it too. 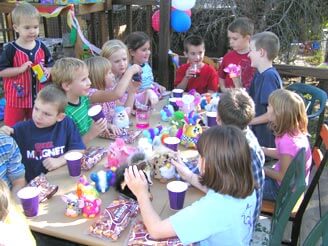 It’s funny, because even though the kids liked the games, they would have much rather just played on our swing set (which cost us $20) and our tire swing (free). The kids were actually more excited about playing together in the yard than they were about playing structured games.

The kids had just as much fun at our homespun party as they had at other kids’ birthday parties where parents rented gymnastics clubs, paid for swimming at the YMCA or took the kids to some other costly venue. I was excited that I didn’t have to spend a lot of money for the kids to have a good time. Since I hadn’t ever done this before, I was wondering if some would complain that it was “boring” just playing in our backyard, but they still remember that party fondly today.

For party decorations, I used crepe paper that I found at a garage sale for .25. I bought balloons, napkins, plates and cups for $1 each at a dollar store.

We covered the table with brown paper (we’ve had a huge roll of it for years) and lined the Furbies down the middle.

I made the Furby Birthday Cake myself by making a 9×13 cake and putting one of BJ’s Furby toys in the middle. Then I just piped on a purple border using a decorating bag and that was it! The cake cost $1.25.

I was able to do the entire kids birthday party for:

I was trying to keep the party cost under $25 so I was excited that it cost even less than that!

Everyone had a blast and it was easy clean up. It was 70° outside so we were able to have the party on the deck (God was showing favor on me! 🙂 so I didn’t even have to vacuum! 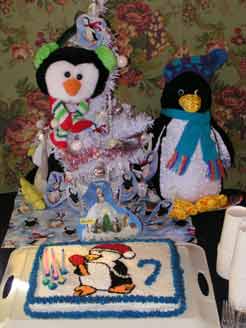 We decided to have a big party for Elly and 13 kids from school came over. It worked out great.

First God was good and it was 55° outside (Her birthday is in January and we live in Kansas.) so they could go out and play on the swing set and tire swing while everyone was coming. We were also able to play our games outside. (No, 55 degrees isn’t even close to being normal for January in Kansas!)

Elly wanted a penguin party. For decorations, I put a dark blue piece of material I had on the table. I used regular white paper plates and napkins and then purchased some white disposable cups for $2. We put her white Christmas tree with penguin ornaments for the centerpiece and her set her stuffed penguins out around it.

We decorated the room with streamers. We purchased them from a garage sale for .25. Mom found a 36″ hanging penguin on clearance for .50 after Christmas and we hung that down from the center of the ceiling fan with some balloons ($2).

For games, we planned a race where the kids carried baby stuffed animals between their legs, like penguins do, across the yard to see who would get to the finish line first. We also did a treasure hunt. The treasure was a bag of assorted candy for each child that we bagged using after Christmas clearance candy. (About $2) We set them all over the front yard for the end of the treasure hunt. (Yes, we learned not to send them to the next state for the treasure hunt this time! 😉 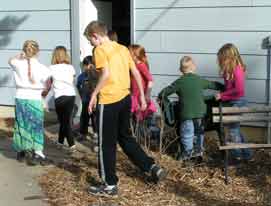 I made the penguin cake, which took a long time, but it did turn out cute. I burned the first cake so the total cost was about $2 for the cakes. 🙂

I had a Victorian dollhouse that I started putting together when I was 18 years old. I never did get it all done. Well, Elly has wanted that thing for years, so I spent two weeks during David’s naps fixing it up. It really needed a lot of work, but it turned out cute and she loved it!

Here are the clues for the treasure hunt in case you are planning your own sometime and need ideas. No, they don’t all rhyme. I was going brain dead by the time I did them. 😉

I think all together we spent about $20 for everything for her party and gifts.

As you can probably see, if you put a little imagination into your parties, you can give your kids great parties without a lot of cost. Generally, kids will appreciate these parties just as much as expensive hosted parties.

Save Money On School Supplies