Get 30% OFF Dining On A Dime print books and all e-books!
Use Coupon Code CHRISTMAS
Learn More Here!

Use these fun and cute Halloween costume ideas for kids and make them, right up to the last minute, with items you already have around the house! 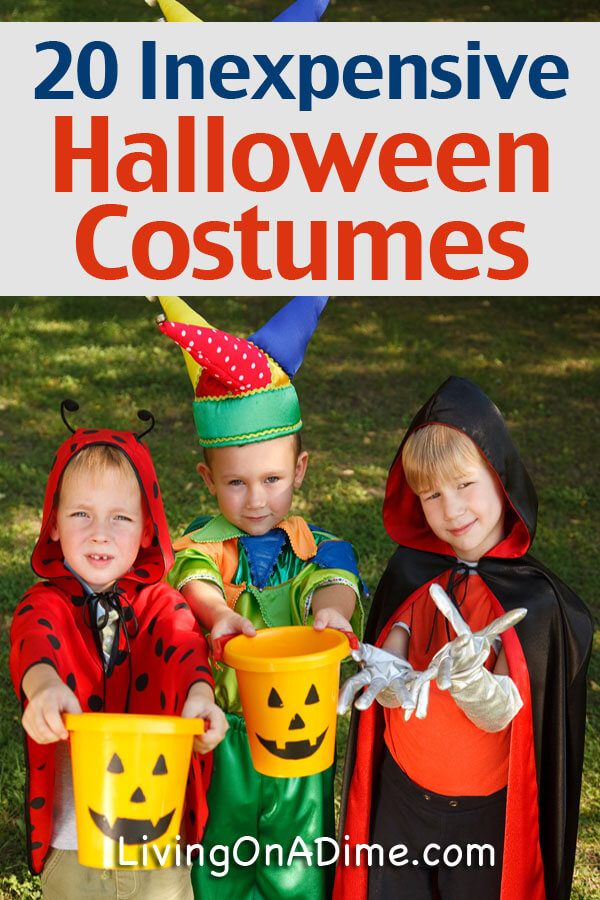 20 Halloween Costumes You Can Make with Items Around the House

Thanks to our friend Kendall for sending these! Tawra

Use these fun Halloween costume ideas and make them — right up to the last minute — with items you have around the house. Find your “base” item and add a few choice elements to put together these ideas in a snap.

“Get a white sweatsuit. From there, your tot can be a dog, a cow, or a ghost. Just get some black felt, cut it in shapes and pin (or velcro) the ‘spots’ to her suit! Add a little black eyeliner to the tip of her nose. For a dog, use the pencil to draw whiskers.” — cl-mon71

“Attach balloons to a sweatsuit and be a bunch of grapes!” –cheatize

“I bought a hooded black sweatshirt for my two-year-old girl and hand-sewed black felt triangles on the hood and glued smaller white felt triangles inside the black ones. She just wore it with black pants and shoes and I used eyeliner to draw whiskers. She was an adorable cat and wore the sweatshirt all winter.” –barville

“Be a bird! I cut out poster-board wings and tail and stapled on elastic bands. My daughter glued on hundreds of feathers, about $2 at Walmart, and wore a blue sweatsuit.” –terri55

“One son was a dinosaur. He wore yellow and green sweats with yellow socks over his shoes. We cut green and yellow sponges diagonally, then tacked the corners together and to the sweats to make the ridges of stegosaurus running down his back and tail.” –terri55

“One of my kids’ favorite costumes was a skeleton. They wore black sweat suits and white gloves. I cut bones out of white contact paper, peeled the back paper off and just stuck them on, painted their faces white and black, and off they went! When they were done, I peeled the ‘bones’ off the sweat suits and they wore the suits all winter!” –mama2olscam

“Last year my one-year-old son was a snowman. I bought a white sweatshirt and pants. We painted his face white, black around eyes, and gave him an orange nose. He wore mittens and a matching knit hat. For ‘coal’ buttons, I cut circles of sticky-backed black felt that could be removed easily from his sweatshirt after Halloween. This costume worked well because he stayed warm all night while trick or treating, and then we were able to use everything all winter.” –mum2sunshinegirl

What’s a quick and easy costume for the toddler? How about a ‘baby greaser’? Use hair gel to slick his hair back, a white T-shirt, jeans rolled up, a comb in his back pocket and a jacket. We used a black spray-painted raincoat from a thrift store but you can also use a jean jacket or similar.” –cl-mon71

“Make a refrigerator out of a box. When you open the ‘refrigerator’ door, there are pictures of food glued inside.” –terri55

“When my sister and I were younger my parents made us into dice. They got a box for each of us, painted it white, cut out head and armholes, and then painted black dots on each side. I was six and on the front of my box were six dots, and my sister was two and so the front of her box were two dots. I have also seen this done with dominos (although that would be harder to sit down in, I imagine). We got tons of compliments and it cost next to nothing. Many stores will give away the boxes they have in storage! –mkadera

“The easiest costume (and cheapest) I ever made for my daughter: I got a big box, took off the bottom, cut holes for arms and head, and wrapped it in gift wrap. Then, I taped ribbon around it, and tied lots of curly ribbons in her hair. Everyone raved about how cute and clever the costume was. I was thrilled that, after years of sewing, one with so little effort got such a result!” –Cherie J. Michigan

“When my daughter was 18 months old, I made a peacock costume for her. I picked up turquoise material and stitched it into a large bag — large enough for her to wear her snowsuit underneath. I then took the leftover material and made a hat for her. On the hat, I glued a few feathers, googly eyes and a foam beak (using craft foam). I also cut out foam feet and attached elastics to them to use as boot toppers. For the tail, I cut out a tail shape and glued peacock-feather wrapping paper (the most expensive part of the costume) on both sides. She looked adorable! (I kept the costume. *Sigh.*) I even made a ‘matching’ costume for me, using a turquoise pullover, plastic mask covered with feathers and matching boot-toppers. It was a lot of fun! Both costumes cost me less than $20 Canadian (about $13 U.S.).” –wintersweet

“Get one of those orange, plastic-pumpkin leaf-bags and stuff it with newspaper. Place holes for you child’s head and arms. Then staple the bottom together. Total cost: about 90 cents.” –baj3

“When my son was two, I dressed him in a pair of his overalls and folded up one of the pant legs about mid-calf. I used a black makeup pencil and drew a few freckles on his face. He wore a baseball cap turned sideways. He was an adorable ‘Little Buddy.'” –Thaysen

“This year my 10-year-old daughter will be a scarecrow. Blue overalls, a plaid shirt, bandana, straw hat, raffia for the straw, a little face paint, and voila, one scarecrow.” –vmacsay

“Last year I had to make my seven-year-old a new costume at the last minute. My nephew was an M and M, so she decided to be an M and M bag. I put together two yellow pieces of poster board from Wal-mart, a few paints from around the house and some jute. I drew freehand the letters from a real M and M bag, painted them, used a paper punch to place holes at the top, and tied the jute together. It resembles advertisement boards people wore in the ’40s. She loved it and we received many compliments about how original it was. You have to cut the poster board down to fit your child. Total cost: $1.20!” –baj3

“The Halloween that my son was two, I let him wear his Batman pajamas (which were actually given to him by an older friend, so I didn’t even pay for them!). Jammies with feet in them lend themselves to all sorts of variations — add ears to make a bunny, paint his nose black and add whiskers for a lion, etc.” –dstorman

“When my kids were little, I’d dress them in snow suits (for warmth), stitch or pin felt ears to the hood and add a simple tail to the back. Then I’d get out my makeup and paint on a cat face.” –cheatize

“Add a little yarn on the hood of a sweatshirt or hooded coat. Paint on whiskers and a dark nose with eyeliner and you have an instant lion!” –debigat2

“Panty hose stuffed with paper, socks or other fabric makes for great ‘tails’ — perfect for all kinds of animal costumes.” –cl-mon71

Fun Halloween Treats and Other Food Tips
Next Post: 18 Ways To Use Leftover Halloween Candy – Ideas and Recipes