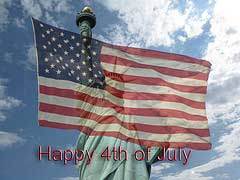 Remember Why We Celebrate Independence Day!

Today is the 4th of July, Independence Day for those of us in the United States.  Many of us will be having lots of fun getting together with friends and families for picnics and fireworks. As I have said on other holidays, please take a moment to remember and remind or teach your children about why this day is important. Remember the prices that were paid by soldiers and civilians alike to gain our independence which we so often take for granted.

Remember the leaders who fought bravely beside their men, who spoke bold, strong words to encourage them, not worrying if what they said would be politically correct. They didn’t straddle the fence with their words and actions so they would look good to others but bravely stood for what was right.

I am so shocked at how little many American children and even adults know about our American history and what led up to that first Independence Day.  They don’t know that the soldiers fought in bitter cold winters, sometimes with no shoes, coats or even blankets to wrap in at night or that they served with few and at times no rations, often having to go find food for themselves.

They were told they were fighting a losing war but in spite of that they kept fighting with faith and courage, even with the odds against them so that not only their future heirs but people from other countries could have freedom.

At times, I am ashamed of the past couple of generations who take all of this for granted. What has happened to that strong heritage where when bad things happen we bravely go on, not whining or having a pity party? So many of us whine about every little thing that goes wrong in our lives. We moan and groan because we can’t go on vacation this year, because money is tight or because our children can’t play football because we are having to live on one income. We complain when we can’t afford a brand new car, bigger house or a big screen TV.

What would you have done in that war for independence? Fight bravely or give up at the first little bit of resistance and make excuses why you couldn’t fight?

I am so grateful and proud to be an American. Some of you have heard me say this before so bear with me. My grandfather came here from Greece as a young man. The greatest day of his life was when he received his American citizenship. He worked very hard for it. He learned English, studied American history and government and knew more about it than most Americans who were born here. He even had his last name changed so it sounded more American because he was so proud to be an American.

To be an American was an honor and a privilege. It was a responsibility, too. My grandfather took that responsibility seriously, working in his community so much so that on the day of his funeral they closed all of the stores and schools in town so everyone could go.

I compare that to so many people coming to America now who refuse to do any of the above, who insist on flying the flags of the countries they have come from, declining to learn English but wanting all the privileges that come with being an American citizen and none of the responsibilities.

This would be much like being on a losing team in the NFL and begging a winning team (and one that makes more money) to take them on, which they finally do. On the day of the first big game the team comes running out onto the field, where they discover the new player in his old team’s jersey. He hasn’t learned any of the new team’s plays and keeps running touchdowns for the other team. What would the fans and other players think of a player doing that? He would be booed off of the field and probably bodily removed.

I’m not saying that we should toss people out or even boo them but to ask that Americans and new immigrants please start being proud to be Americans, not in a self righteous way but in a grateful and responsible way. I was walking around the grocery store this morning thinking how blessed I was to be able to live where I can wander around an air conditioned store full of huge amounts of good food to pick and choose from when this classic song started playing. I think it says it all:

I pray that God will bless us but even more so that we will be thankful and grateful to Him for our country and give Him a reason to be a proud Father as we become children of good character and integrity.