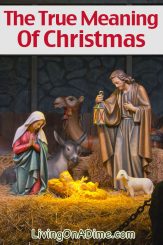 When you’re struggling to decide on a gift, consider the true meaning of Christmas. Genuine giving is not about how much you spend but how you love. 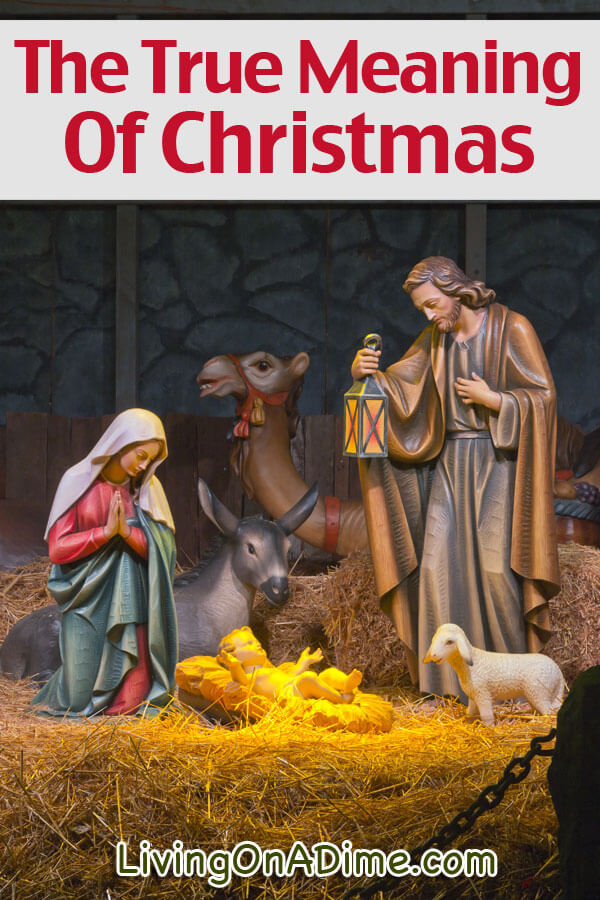 The Gift – The True Meaning Of Christmas

She stood at the window watching the snow falling gently to the ground. Thanksgiving was over and soon it would be Christmas, her favorite time of the year. But her heart was heavy in spite of the snow and the feeling of Christmas that it should invoke. The Christmas spirit that she had felt all year long seemed to have been drained out of her with a couple of simple phone calls, each from a family member saying they didn’t want to exchange gifts this year because they couldn’t afford them.

As she turned from the window, her eyes fell on her little tree standing in the corner. Its lights twinkled ever so brightly, casting a warm glow over the small pile of gaily wrapped gifts lying under it. A smile touched her lips as she thought of each person that the gifts were for. In her mind she could see the joy and excitement on their faces as they tore open the gifts and saw what was in them.

All year, she had carefully planned their gifts and had sacrificed much time and money in order to be able to buy them. She listened to each person’s big desires and little ones and had drawn so close to them that she knew not only the things they verbally said that they wanted but also the things they hadn’t voiced. She knew she had bought each one the perfect gift — Not the most expensive gift, maybe, but the perfect one for them.

Yes, she had sacrificed a lot to buy the gifts, but because her love for each person was so great and because of the joy she felt in giving, she didn’t see it as a sacrifice at all. So what if she had to turn the heat down a couple of degrees and wear a sweater in order to be able to have a little extra to buy that special gift for someone she loved. Yes, it’s nice to go out to eat at the end of a long hard day, but it’s even nicer to watch the face of a child open a present and go into rapture over his new car or to see mom get tears in her eyes because you not only remembered her favorite perfume but also how much she had longed for it.

Of course there had been times when she had looked in the store window thinking how wonderful it would be to own a dress like that, but when it came to a choice between that and the fur trimmed coat her granddaughter wanted, the coat won hands down. To see that granddaughter running towards her and throwing her arms around her once more thanking her for the new coat would make her feel more beautiful than any new dress could.

Oh, she knew there were those out there who would scold her and say she should think of herself more and do more for herself, but she just shook her head in pity for them. They had no idea what they were missing out on with that attitude.

It was that very same attitude that had caused the heaviness on her heart right now. The phone calls she had received came from people who had spent all year spending money on the things they wanted: new cars, TVs, clothes and going out to eat and now they had nothing left to give to someone else.

“When did it happen?” she wondered, “– this change in people’s thinking.” What happened to the times when even a small gift was greatly appreciated because you knew the person had sacrificed so much in order to buy or make it? What happened to the times when parents, spouses and children worked so hard in order to be able to give that special gift to someone they loved? When did it become acceptable to call on your expensive cell phone, from your favorite restaurant, to let others know that you can’t buy them a gift this year because you can’t afford it? Had she been mistaken all this time in her understanding of gift giving?

With a droop in her shoulders she turns and walks toward the little tree. How could it have lost its sparkle in a matter of moments? Why do the presents under it suddenly look less gaily wrapped? With tears gently rolling down her cheeks, she stoops to turn off the tree’s lights. As she reaches for the plug, her hand accidentally brushes her Bible laying on the table. She looks up through the blur. Her eyes alight upon the passage on the open page. “For God so LOVED the world that he GAVE his one and only Son, that whoever believes in him shall not perish but have eternal life.”

A sweet peace starts warming her heart. She begins to smile and her tears are flowing even more freely now — not from sadness, but from joy. The lights on the little tree become brighter and brighter, lighting up the whole room with it’s sparkle. The gifts under it look more beautiful than those in the most expensive department stores for, in that moment, she realizes that she wasn’t wrong to love, to sacrifice and to want to give gifts to the people she loves.

Hadn’t God Himself so loved us that He gave, with the greatest of sacrifices, the most wonderful gift, His Son. She was so glad that God hadn’t spent His time in heaven selfishly using all His resources for Himself. She was thankful that He hadn’t sent her a message saying, “Sorry, but I can’t afford to give you a gift this year.”

In those few moments of heartbreak she had learned something more. She had learned what God must feel like to have the gift that He sacrificed so much to give be rejected and scorned. How hurtful to take away the blessing of giving from someone or to reject their gift.

Yes, it seemed to be popular to say, “We can’t afford to exchange gifts this year”, but it didn’t matter. She would continue to love, sacrifice and give, always following her heavenly Father’s example.

The above story is fictional but I wrote it because within a week’s time I’ve heard so many people say, “We aren’t exchanging gifts because we can’t afford it”. What was even more shocking was these words came from people who typically made more money in one week than I did in one year and yet I, with so much less income seemed to have no problem buying gifts for my whole family.

When I commented about this to my son, he said “Mom, what you don’t realize is that a lot of these people feel like if they can’t spend $400 or more on each person, they can’t afford it so they just don’t give at all.” Once again, I see it is all in the way you look at things. If you are feeling that you can’t afford Christmas gifts this year you may want to do some soul searching about the true meaning of Christmas.

Don’t let pride stand in the way of giving gifts to your friends and family. Instead of saying “We can’t afford it” which seems to be the acceptable and politically correct thing to say, be honest with yourself and others. Is there somewhere you could sacrifice something? If circumstances in your life have changed then maybe you could just say “I can’t afford to give what I used to give but I love giving gifts and I still want to exchange. I just can’t spend as much”.

If you feel that way, then it may be that your gift giving is getting out of hand. Are you buying gifts for your hairdresser, garbage man, mailman, babysitter, and your third cousin’s fourth removed son? No wonder you are frazzled. You don’t need to explain anything to these people. Just stop buying gifts for people that aren’t close to you.

If you don’t want to mess with the gift exchange at work, just politely say you can’t do it this year. If you still feel like you have to give something and can’t say no then buy one inexpensive gift to give everyone. For example I know a woman who buys several large gingerbread men every year and gives them as Christmas gifts. Young and old alike love them and they are gender friendly. They don’t cost a lot and it saves wear and tear on her nerves trying to find that perfect Christmas gift for someone she doesn’t know very well.

Seriously think through your gift giving and your reasons for or against it. Remember it really is the thought that counts and not the expense. If you don’t think that is true, then why is it that the present your child spent $1.00 of their hard earned money on and much time and energy picking out means more than a very expensive gift given to you out of obligation by someone you don’t know very well?

So that our inbox won’t be crammed with e-mails let me end with this: I know there are times when you really and truly can’t afford to exchange gifts or maybe because of extra large families or combined families you need to draw names. That is fine. The above story isn’t describing you. You know your situation better than I and you don’t have to explain yourself to me or anyone else. Who I am talking about though, are those who sit in their favorite restaurant, where nothing on the menu is under $15, with a days worth of shopping for new clothes for themselves ($100 pair of shoes, $200 purses, $60 name brand jeans) sitting at their feet while they call to say they can’t afford to buy Christmas gifts for anyone.

Check your motives carefully and this Christmas buy your gifts with your heart and not with your pocketbook. Remember the true meaning of Christmas is not shared by how much you spend on gifts but by the heart with which you give.