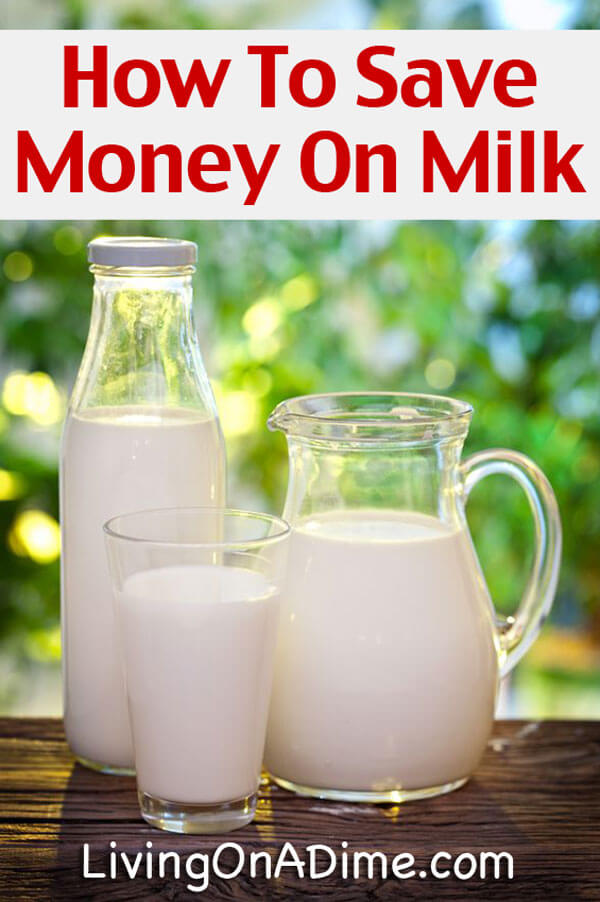 Even with rising prices, you can learn how to save money on milk. Using these easy tips, you can cut your costs and start paying off debt!

How To Save Money On Milk – The Great Milk Crisis!

I rushed to my computer to write this when I heard the news. I knew there would be a great panic over it and thought I could hopefully calm some fears. What was the news? Was it something earth shattering like flood, epidemic, or war? No! But it made the headlines – “The price of milk is going up!”

I could hear the panic in the newscaster’s voice and the trembling in “Mrs. Woman-on-the-street’s” voice as she answered his question, “What will you do now?”

“I guess I will have to just start watering down my children’s milk because they just love it so much.” Then she took a deep heart wrenching sigh…

Of course, I’m telling you this with tongue in cheek. We live in a world of panic and fear. I try to put these things in perspective. I mean compared to the Great Depression, the Dust Bowl (for those of you who aren’t up on your history, that’s not a new football game 😉 ), the flu epidemic of 1917, and World Wars I and II, the fact that the price of milk is going up 50 cents ranks pretty low on my list of things to panic about.

No, I don’t have lots of money to throw away. At this time in my life I am pretty much living off the same amount or less than most people on welfare or some elderly people on social security so any price increase is hard on me too and I appreciate the value of learning how to save money on milk.

What I found most interesting was the next item of news after the earth shattering milk scare. It was about a new “apple” that is coming out on Friday and everyone can hardly wait to buy one for $500. I mean to me, paying $2.50 for three pounds of apples is outrageous, let alone spending $500 for one apple! OK, I’ve got my tongue in my cheek once again! Even though my children think I am completely computer illiterate, I do realize that the new “Apple” they were talking about was some sort of fancy hand held computer/telephone/phone (I think 😉 ).

Here’s my point: We sometimes have our priorities goofy. These people were horrified at having to pay an extra 50 cents for milk — food that they really needed for their children, but they thought nothing of having to pay $500 for what basically amounts to a new electronic toy.

Having milk prices go up is irritating yes, but it is not the end of the world. (Having my Hershey’s candy bar double in price overnight — now that is something to panic about. HA! HA! Talk about priorities! 😉 Before you come unglued each time you hear that the price of bread, milk or gas is raised, try putting it into perspective.

I don’t want you to think I am taking this whole thing too lightly. I do want to help make things a little easier for you, so here are some tips to help you save money on milk. Most of these basic principles can be used with any food item whose price is getting higher than you would like.

As much as I hate to admit how old I am, I have lived many years now and one thing I have found is the price of food always changes – up and down, this way and that – but it is nothing to panic about. Everything usually balances out in the end. Just adjust your eating habits accordingly and you will do fine. Besides, over time most incomes usually end up adjusting to the price of things, so it all balances out.

Hopefully, you can now enjoy your next glass of milk… but watch out for those terribly expensive “apples”!

Click here to read some reader responses to “The Great Milk Crisis”.

How to Save Money on Milk a tip you didn’t know!

I know I’m repeating myself but always ask!

The dairy guy happened to be restocking when I was there last Monday so I asked him when they mark it down. He said on Monday, Wednesday and Friday mornings and the other days it’s afternoons! He told me that he marks it down at 7a.m. on Monday and Friday but he’s not sure what time the Wednesday morning person gets it done. He said if I wanted to be sure and get it then to come on Monday and Friday mornings. He also said that they mark it down when it’s a week left until the expiration date! That’s a lot of time left!

It’s defiantly worth a trip down there to stock up the freezer and now I know for sure when to go! Even if I didn’t have a freezer it would pay to plan my grocery shopping on those days.

Save Money In The Kitchen – Easy Ways To Save on Groceries

6 Ways To Save On Your Grocery Bill