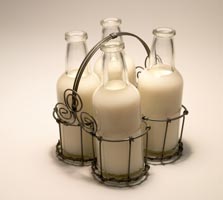 Our Readers Weigh In On The Great Milk Crisis!

Tina H Writes: Thank you for the milk article. I have been attempting to warn my friends for months. I work for the local government and periodically get to sit in on different meetings including dairy farmers, etc. What the average person doesn’t know is that the farmers are not getting the profit increase. This also drives up the cost of butter, yogurt, cheese etc. So I warn others to stock up and freeze all the butter and cheese they can afford each week. This winter will be tough on everyone. All food is going up, freeze and can all you can! Also, I recommend you purchase block chedder cheese, it is easy to grate, you use less and does not come with binders and potato starch that causes many problems for people with hidden food alergies.

Heidi Writes: I read your recent e-mail about the panic caused by the sudden rise in milk prices at the store. I appreciated your tounge in cheek humor. I just wanted to let you know, (and hopefully your readers) that dairy farmers are one of the most over-worked and under-paid groups of people that I know. I happen to know this because my husband and I are dairy farmers! We scrape by every month, many months spending more on farm expenses than we generate in income. For once, farmers are starting to get paid decently and the whole country erupts in angry protests. No one seems to take into account that bottled water costs consumers more in many cases than even milk!!!

I recieve your e-mails to help me cut costs here in the house and I do appreciate the information, I just wish people realized that behind every gallon of milk is a family trying to make ends meet!

Roxie Writes: The Big Milk Crisis———–One of the things I do to save money on milk (I did not see it in the article at all) is use 100% powdered milk for cooking and baking. I also mix powdered milk with whole milk for a nice tasting 2% milk for my family. If I did not make it to the store, I can get the kids to drink powered milk if I put some chocolate flavor in it. Every dime I save on food goes to help me put two little boys through college and fund my retirement, so I don’t spend money I don’t have to spend…Roxie

Theresa K. writes: I was surprised to read that some people pour sour milk down the drain. All the women in our family always used sour milk to make the best pancakes. They are very light and fluffy. Sour milk is the same or similar to buttermilk and companies sell buttermilk mix for pancakes. Try it. -Theresa

Barbara writes: I just wanted to say "amen sister" to today’s article on the price of milk going up. I am the daughter of a farm family who lived through the Great Depression and I can get livid when people complain about the price of milk, and other farm items.

First of all, the farmer gets very little, if any, of that increase. The price of milk has not risen anywhere near the price of many non-food items. It is the same way with eggs. If they go over $1 a dozen, people are hollering in outrage.

When my kids were little and I could not afford enough milk, I would buy a gallon of whole milk and dilute it with powdered milk to make three gallons. I then had three gallons of 1% milk at a cost much less than if I had bought 3 gallons of 1% milk. It was a lot cheaper and healthier. No one needs to drink whole milk. It is meant to get a calf to full grown in a year. This is also one reason why we have so many overweight kids. The other is lack of exercise, but don’t get me started!!!!

AND THEN you mention the IPod. How can anyone in their right mind stand in line for two days to put out that much money for something that will probably be obsolete in 6 months or less!!!???

Like you said, most people’s priorities are totally backward. I used to have an e-mail that compared the price of a bunch of items by the gallon that people do not complain about buying and it was really ridiculous. I wish I could find it. My favorite, though, is cigarettes. Around here they are all but $5 a pack. A pack a day habit cost more than a gallon of milk, which will usually last at least two or three days and it is only $4, I think. Personally, I drink nothing but reconstituted dry milk and I pay about $1.50 a gallon and always have it on hand! The water I use is free!!!!!

Sorry to ramble on so, I just wanted to let you know someone agrees with you.

Lisa in Tennessee writes: This is in response to the milk article. We already implement most of what Jill suggested, but I have another suggestion to add. About one year ago, I heard of an acquaintance of mine who made their milk from powdered milk. I balked at the idea, but when we were out of the "real" milk one day, I decided to try it.

From that day on I WAS STUCK ON POWDERED MILK! The children didn’t notice the difference at all (we already were drinking skim milk). We don’t drink that much milk anyway, because like you said, I make other things for breakfast and we drink water all day long. But when we eat cereal or I need milk for baking, etc., powdered milk is just fine for us.

Anyway, I just thought I’d pass that along. Sometimes it’s just our mindset that we have to hurdle ourselves over, and after that, it’s smooth sailing!

Thanks for you ministry,
Lisa in TN

PS–to add to my suggestion, if someone wanted to slowly wean their family onto powdered milk, they could make some, add it to the "real" milk, and go from there. Within a couple of weeks family members would be used to it.

Judy L Writes: One way to stretch milk is to mix with equal amounts of reconstituted dried milk. Make sure to mix the dried milk into water thoroughly and get it very cold before mixing with the fresh milk. We lived overseas and did this often when milk supplies were low. My kids never knew the difference. Love your newsletter!

Zafar asks: I received your one article the other day that stated you can freeze milk. I was wondering if you freeze milk before it is opened and expired, how long will it last after it has thawed? I am was very happy to see that milk could be frozen. Thanks for the great tips. I am trying to live a more productive lifestyle by "making the most of what I have."

Tawra: I just put it straight in the freezer. I don’t even drain some off anymore. It expands but not enough to break the bottle. When you defrost it, shake it well because freezing causes it to separate somewhat. Once defrosted, it will last about as long as milk that had not been frozen — about a week if kept regularly refrigerated. If you keep it longer than that and it gets sour, use it for baking! Sour milk makes great pancakes and biscuits.

Stacy T. writes: One thing I found interesting was a tidbit of advice from my mother. Since I bake bread in a bread machine, I keep around powdered milk. She told me of a friend who used to mix up a half gallon of the stuff and pour it in her milk gallons when they became half empty. Of course, no one in my family would go for that (I’m not a milk drinker myself, but my husband can drink a half gallon at dinner itself! I finally got him to drink 2%, but he would never drink the powdered skim!)

But it got me thinking. How many dishes do I cook that call for milk? Honestly, no one would really know the difference if I used the reconstituted powdered skim or the store bought 2%! What a way to save money! Especially considering how much my husband drinks! (Trust me, I’ve tried to ask him to cut back on the milk, but it won’t work.)

When my daughter was about 3 yr old (she just turned 40), we switched to using powdered milk. I had figured the cost and at that time it was less than buying regular milk. To switch, at first I mixed half regular milk and half powdered milk for a couple of months, then when to powdered milk completely. With having a large box of powdered milk on hand, it meant not running to the store just for milk. Now all these years later, I still using powdered milk most of the time. Since it is low fat, it is better for you anyway. I have read that kids over the age of 2 do not need whole milk.

You are completely right about measuring milk, cereal, etc. My husband is now a diabetic. All of his food is measured at home. I am in shock when I see women at work pouring a huge bowl of cereal to eat at their first break. One bowl of what they consider normal equals about 6 servings of cereal. No wonder those women (and their kids) are grossly overweight. Americans do not know what a serving size is anymore. They need to read the labels.

You have an excellent newsletter and I am telling all my friends and neighbors about it.