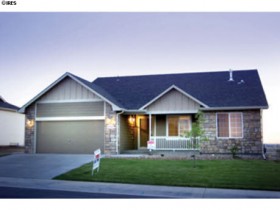 The model of our new house.

After we looked at the house on Tuesday, we thought it might be a great house. The only problem I had with it, was that the living room and dining area seemed small.

Brand new built just for us. I’ve never had a brand new house and it would be very nice to not have to worry about anything major breaking down for the first 5-10 years.

We got a 3 car garage so in case we do need to sell it again it will be easier to sell.

The middle and elementary school are 2 and 3 blocks away.

The post office for shipping orders is 4 blocks away.

It has paved roads and sidewalks. I’ve never had a paved driveway and haven’t had a road or sidewalks for more than 11 years! Having a clean car again will be fun!

The laundry room, office, master bedroom and the baby’s room can all be on the top main floor so I’m don’t have to hike up and down stairs all day long, which is horrid for someone with fibromyalgia.

The kids can all have rooms of their own in the basement and there’s room down there for a large family type room.

The kids will have lots of kids in the neighborhood to play with. They don’t have any now.

There’s no tile, wood floors or granite in the house. (I think all those thing are from Satan! I hate cleaning that stuff and with 4 kids, the noise is really magnified!  🙂

It’s centrally located to all our family on both sides that live from Broomfield to Loveland to Estes Park and we can get to anyone in about 25 minutes or less!

All the street names in the neighborhood are named after plants!! I’m sure it’s a "sign"! hehehe

After looking at it for 1 1/2 hours on Monday, we decided to come back on Tuesday and take the entire family with us. My uncle works in construction so he came along to give us an opinion about whether it would be built well.

Everyone loved it and, after going back, the living room looked bigger than I remembered. My uncle said it’s some of the best construction that he’s seen on a new house.  So we decided to go ahead and buy it. It’s funny because after we told the family we would buy it, we found out that the electrical company our brother-in-law works for will be wiring the electrical system.

We sent Mike’s mom back to the hospital so that she and his dad could start looking over the HOA requirements and contract sample while Mike and I got the contract filled out with the builder. The best part is, even though Mike’s dad didn’t show it to us, they still gave him his commission, which he plans to give us and the company is paying up to $5,000 in closing costs on top. It’s $20,000 less than we were expecting to spend which is the exact amount we lost on this house!! That’s proof for me that we shouldn’t worry because God will work it out. (Ok, so I still worried about losing that much but I’m trying not to! 🙂

We got the papers filled out and took them to the hospital to have Mike’s dad look it over and sign it. (The poor guy was in a huge amount of pain so I’m not sure how he did it, but he did.) We were almost done reading over the HOA stuff when on the last page it said "you can’t plant flowers closer than four feet from the house".

That is a HUGE problem for someone like me who lives to garden, So we left and decided to think about it. Sitting in the hospital lounge talking it over, I just burst into tears. We were SOOOO tired after going fast and furious non-stop for three days. We thought we had a house and one thing made it seem like it was gone.

We decided to hold off on the new house a bit and look some more. We were going to leave the next day to go back to Kansas but before leaving we drove around Loveland to look at more houses and neighborhoods. Mike’s dad couldn’t show us any houses until May 15 but we decided to at least narrow down some neighborhoods and surrounding towns.

We were further discouraged as there wasn’t anything that we liked in our price range so we decided to drive back one more time to the new housing area and look at other people’s yards and see what they did for gardens. Well, there were a lot of houses that had gardens, so we knocked on some doors, asked some people on the street and they all said they loved the houses and they plant all kinds of gardens and it’s the best neighborhood to live in.

We called the HOA and the builder and did a lot of praying. They both said it was fine, no problem. We went home and both Mike and I felt like we should go ahead and do it, so the next morning at 7a.m. he met the builders rep. at a convenience store on I-25 to give him the contract because the selling agent was off that day.

So….we HAVE A HOUSE!!!! I won’t be able to put in the wonderful cast iron farm sink that I bought last fall or my white picket fence but I think the trade off is worth it to get a brand new house.

So…needless to say I still don’t think we’ve recovered from the trip but it was worth it! Mom, Elly and I are going back this Friday and get to pick out the counter top colors and carpet and vinyl so that will be fun.

BTW, yes, mom is going to try and move back there, too, but it will probably be six months to a year before she can.