No interest credit offers and layaway plans can be an attractive temptation, but is no interest REALLY no interest? Read this FIRST before adding that debt! 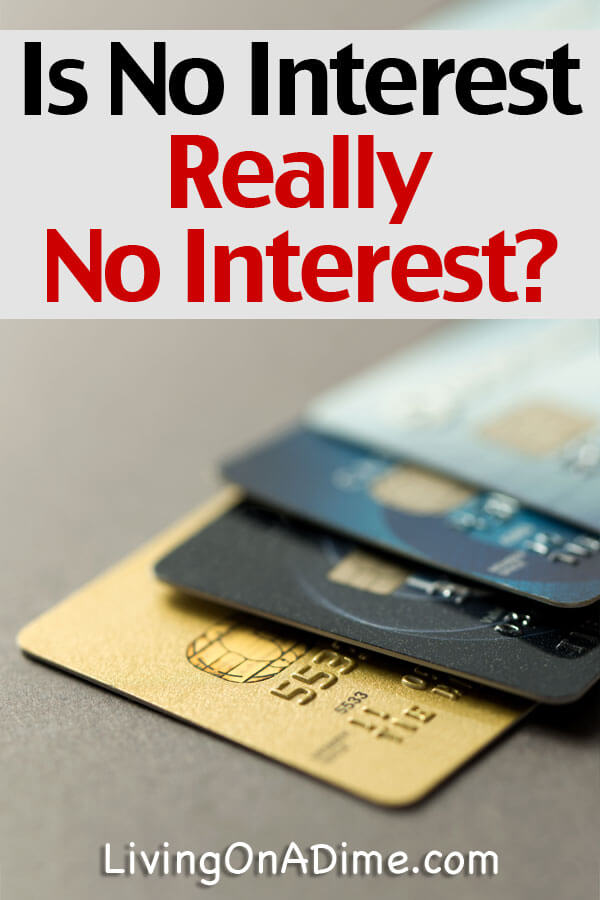 I read this cute saying in Reminisce Magazine the other day. It said:

“Too many people buy things on the lay awake plan.”

I chuckled at it but I realized that those words are so often very true. It was reinforced to me this past weekend when I was bombarded with ads on TV saying “No interest until the year…”

Top that with a woman asking me if she should buy some new things for her home which were on sale and that she didn’t want to pass up. The cost was going to be $6,000. Her husband had only been working a few months after having been laid off and they had no savings, so they were going to charge the things.

Here are a couple of questions I asked her to help her make her decision:

Would the interest she would be paying on it cancel the savings she was getting?

She said no because the great part was that the company was giving 0% interest for 1 year and they didn’t have to worry about interest. Then I asked the next question which people in this situation don’t often think to ask themselves.

Can we afford the extra $400-$500 monthly payment each month for the next year on top of our regular bills?

This is what she would have had to pay each month for a year in order to get it paid before having to start paying interest. In our minds we often think, “I don’t have the money now but I will have a whole year to figure out how to pay for it.”  We falsely think that in a year we will have had some magic fairy bring us all the money we need and will be able to pay it off.  We put it on the back burner, get busy and forget about it then BAM! Your year is up and you still don’t have the money. If you are struggling now to make ends meet, chances are you will be in the same boat in a year. For some reason not having to pay interest for a year often gets confused with not having to pay on that bill at all.

Did you read the fine print and do you know all the facts?

People don’t always read the fine print and the salesman often doesn’t mention it to you either. Most of the time, if you don’t get it paid off by the end of your interest free period, you get billed for all of the interest you would have paid back to the first day you bought it, meaning there was really no interest free period at all. Yes, they say you don’t have to pay interest for a year but that just means they are giving you a chance to pay it off in a year.

Do you know how much interest can be added to $6000 in one year of not paying on it? Depending on the percent but it can be hundreds and even a couple thousand of dollars. Many companies charge 29% interest which works out to nearly $2000 PER YEAR extra on that $6000 item. This is why people often can’t seem to dig themselves out of debt. So much for the good deal.

Don’t be gullible and easily swayed. Most of these too good to be true good deals are not good deals.

In closing, remember this: We don’t know what the future holds. You could lose your income next week, a spouse could die or leave, the economy could bottom out or you could be seriously disabled in a car wreck today. As negative and depressing as that all sounds I just want to remind you to face reality – things happen. The creditors don’t care what happens in your life and you will still have to pay even if something unexpected happens.

Each debt you bring upon yourself is like another heavy burden you are adding to your back to carry. Imagine walking down the road and you and your spouse are carrying this heavy overwhelming burden. You seem to be doing fine trotting along carrying your burden but then suddenly your spouse is out of the picture and you are carrying the burden alone. It is heavier but you are still doing ok. Then you trip and break your leg and arm. The weight of those burdens doubles and becomes almost impossible to carry.

Be careful. Life happens. Make sure that you are not adding more burdens to your back than you will be able carry.

How to Deal With Layoffs