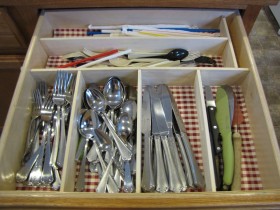 Since we moved into our current house, my silverware drawer has been driving me crazy. I could not find any kind of drawer organizer to organize it!  It’s hard to tell in the pictures below but I found some plastic containers at the dollar store and I had been using them to organize the drawer. The problem was that they didn’t fit so the sides were smashed in and they kept sliding all over the place so they wouldn’t stay put. I tried duck tape and grippers, all of it and it wouldn’t stay put.  The other problem was that the compartments just weren’t arranged well and they were too small.

So I set out to fix it. I went to four or five stores and bought five or six different silverware trays and nothing would fit my drawer right! Then I saw the best thing! It was an adjustable divider. You could buy as few or many as you needed and then just make your own. They had a spring on the end that moved the divider longer and it was perfect! I was so excited that I grabbed it at Bed Bath and Beyond… Then I looked at the price. $20 EACH!!!!  ARE YOU KIDDING ME??? It would cost me $100 to organize one drawer. NO WAY!!!

As I was cruising around the Internet one day, I found someone who had made her own. I didn’t keep the link because I thought, “Yeah right! What a pain to make.” Then after my $100 revelation, I thought, “What can it hurt to try??”.  So I went to Lowe’s and got 2 pieces of birchwood and made my own drawer organizer. It was pretty simple!!

I know it doesn’t look horrible but it was a huge pain to use! 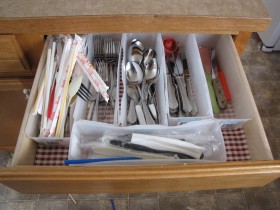 I took everything out and measured the scientific way. I put the stuff in there and then put a cut board at the top and put it in at the top of the knives. 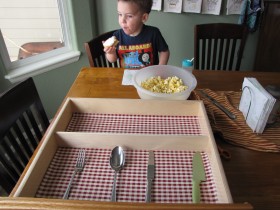 Then I divided the bottom section to put my most used items at the front. I had enough silverware that I could just equally divide them. Then I put a little mark so I would know where to glue them in. 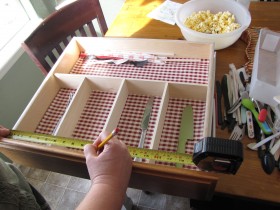 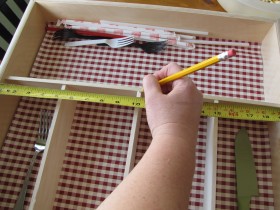 Then I discovered that I made a scientific calculation error. I cut the board to divide the top too short. Oops! I WAS NOT about to run to Lowe’s to buy one more piece of board because I messed up so I found a scrap piece and was able to put it on the edge to hold the board in place.  Not much will fit in there but you could use it to store twist ties. :-)

I used gorilla glue for my dividers. I had a hard time keeping them upright and in place so I put a finishing nail in the top to keep them all in place. 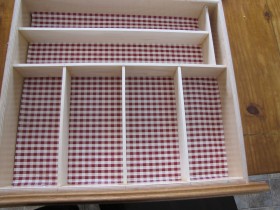 Here’s my new silverware drawer loaded. I put all the plasticware and straws up at the top so that now we can get to our regular silverware easier.  The best part is that now nothing is sliding all over the place and all the utensils fit in the drawer even when every piece is clean. Before, the silverware would get stuck on the top of the drawer and jam the drawer if you didn’t get them in there “just so”. So, I now have an easy homemade drawer organizer for $6 instead of $100. Yeah!!!