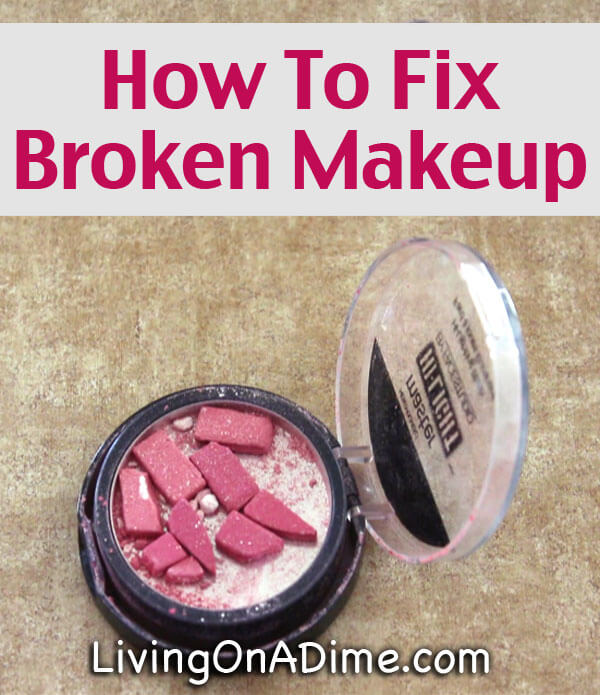 Have you ever broken a favorite makeup, but hesitated to throw it away? Did you know you can fix broken makeup in 30 seconds? Here’s an easy way to fix it!

How To Fix Broken Makeup In 30 Seconds

About 15 years ago, I had a favorite eye shadow and it dropped on the floor and broke. The lid stayed on, so it didn’t go everywhere but it was just a bunch of little pieces.

At the time, we lived out in the middle of nowhere, so just running into town to get more makeup was not an option. My makeup was one that wasn’t even in stores anyway so I couldn’t just pick some up even if I could get to a store.  As I was looking at it and lamenting the loss, I wondered if I could fix it.

I decided to give it a try and it worked PERFECTLY! Once it’s fixed, you never even know that it has been broken. I was able to fix my broken makeup and save myself several dollars and the hassle of trying to find some new makeup to replace it.

Watch our video, “How To Fix Broken Makeup” Here:

That’s it!! It’s super easy! I have done this many times over the years and this has never failed. (I’m a huge clutz and I always seem to be dropping my makeup and breaking it!) It works for both blush and eye shadow. You can also use this same method and mix colors to get the color you want. I had 2 blushes that I didn’t like but when I mixed them together, the result was perfect!

How To Refill A Swiffer Mop With Homemade Cleaner
Next Post: The Very Best Cinnamon Toast Recipe