Do teenagers have to be more expensive than younger kids? There can be a lot of high school expenses for optional activities, but do YOU have to pay them? 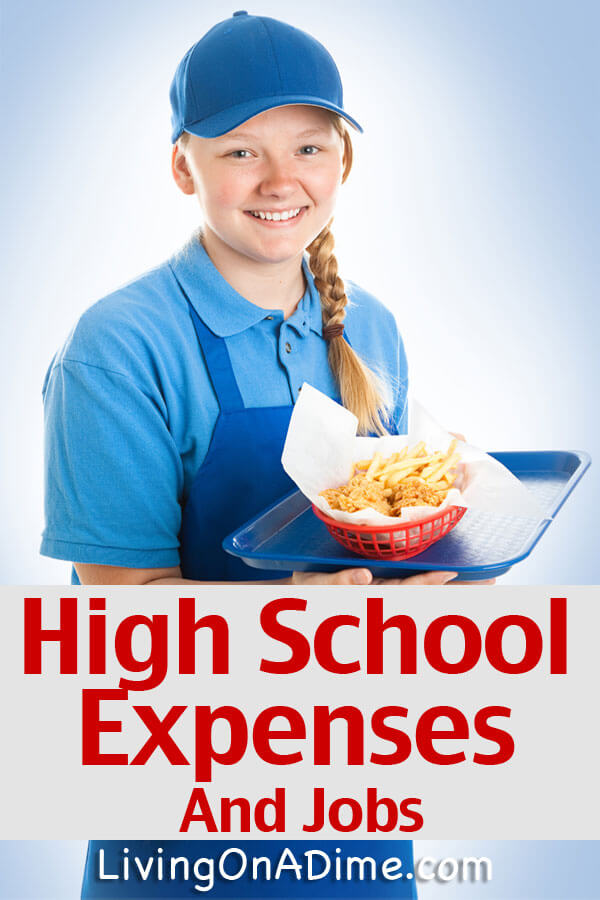 People have often told Tawra, “Wait until your kids get older and are teens in high school because that is when the expense really starts.” What the people who said this didn’t realize was that I write more than half of the things about saving with kids. I have had teens and know that this doesn’t have to be the case.

When my kids were in high school everything cost me less, except for food (because I fed their friends a lot). In fact, everything else cost me almost nothing. How was that?

It’s so simple – I made them pay for it themselves. By the time kids are 16, they really need to be working at least a part time job. This will not only help with school expenses but also with expenses like their car insurance, which mine had to help pay.

It was amazing how many things they decided they really didn’t want that badly when they had to pay for them themselves- things like buying a yearbook every year, buying school pictures and going on optional field trips.

Pare things down. A child doesn’t need a yearbook every year. Maybe just get them one for their senior year. When Tawra got her class ring she didn’t get a “class” ring but a nice gemstone ring that she could wear forever.

If you have trained your kids to be wise with their money, by the time they get to high school they will be smart enough to know that most of these things aren’t that important. Think about it: how often do you get your yearbook out and look at it. I haven’t looked at mine since I graduated. I had a class ring but I have no idea where it is and I don’t miss it. It went by the wayside as soon as I got my engagement ring.

That doesn’t mean I didn’t ever help them when I had the money. Often, I would do things like this: If they really wanted something badly, instead of a Christmas present I would get the item for them as a Christmas gift. (Note from Tawra: Like giving me the cash she would have spent on gifts to help pay for my trip to Germany.)

All activities need to be controlled just as much in high school as in the other grades. There were several trips Tawra could have taken with her class. Instead of going on all of them, she chose to go to Washington, D.C. with her singing group. She chose this over her class trip or something else. You’re teaching them to be adults. Part of growing up is learning to set priorities.

Did she lose out on anything? Not really. She had already been to Germany by herself and the week after she graduated she went to Europe to be an exchange student, after traveling around Europe for the summer. She also received a scholarship to go to the University of Sweden. All of these things cost me very little. Why? Remember the extra food I talked about earlier? While Tawra was in high school, half of the exchange students were at our house all the time and, after graduation, they all invited her to come stay with them. She had no motel or food bills at all and she bought most of the other things she needed herself using her savings.

As far as everyday activities go, my kids didn’t hang out at malls or other places where they had to spend money. They hung out at home with their friends. They did go to a movie or something once in a while but between homework and jobs they didn’t have as much time to waste cruising malls or going other places to spend money.

A teenager needs to get a job and the sooner the better. Even filling out a job application can be traumatizing so it is better for teenagers to learn these things when they are at home and you are there to help them. It’s your job as a parent to help them learn responsibility so that when they get older, they’ll be able to handle life themselves.

Even younger kids like 13 and 14 year olds can do things like volunteer someplace. This gets them used to experiencing what it is like to be in a workplace environment, even if they don’t get paid. Tawra volunteered at the hospital when she was 14 and at 15 they asked her if she would like to work in the flower shop and get paid.

At first, my son worked for me in my manufacturing business (Tawra did too) and as soon as he was old enough, he worked at places like Ace Hardware. This was such a good job because he learned more “handyman” things that would help him in later years. This would be a good first job for a young boy who doesn’t have a dad to go to.

My brother’s son volunteered to work at another business just sweeping and doing basic chores and later, that business hired him. The business gets to know the child’s work ethic and is often willing to hire them when they are old enough. The kids get to learn all the elements of a real work place before having the pressure of supporting themselves. This also helps them decide if this is the type of field they may want to study for and work in later in life.

Most of all, it is in the parents’ attitude. If you have let them manipulate you for years making you feel guilty when you don’t give them everything they want for whatever reason (you didn’t have much when you were young, you feel guilty because you don’t spend time with them, you were traumatized in high school, etc.) then they will manipulate you in high school, too.

Once again, it goes back to mastering your emotions. If you think not getting all these things will warp your children for life, they will think that too and they probably will be warped, but if you have the attitude that, “We will do what we can, but you will not die if you can’t do it all,” they will probably grow up being more stable and level-headed.

From Tawra: Now that we have teenagers, they understand that it’s their responsibility to pay for things they want beyond basic needs, so they pay for any electronic devices, most eating out unless it’s a family event and other optional items.

We allow them to buy some things, like computers and phones, only once they reach a certain age. We’re not enthusiastic about kids being inseparable from phones, so we don’t allow them to buy phones until they’re driving and/or have a job.

Also, they’re responsible for car expenses and insurance, but we pay part of the gas and insurance for one son because he drives himself and his sister to school, which we would have to do if he wasn’t driving. We also pay some expenses, like gas, to account for trips we ask them to make going on errands for us.

We don’t make them pay for reasonable clothes and laundry but they do wash their own clothes.