Cutting a Turkey in Half 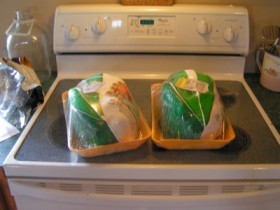 Ask The Butcher To Cut Your Turkey in Half

We have often advised readers to ask the butcher to cut a turkey in half if it’s too big for your family. Then you can cook just half as much at a time.

Just so you can see, this is how the butcher will cut the turkey in half for you. My family can’t eat an entire turkey at once so we have them cut it in half. Sometimes they will wrap both halves together but just ask them to do it separately and they will. At .69 a pound that’s a great deal on meat!

Here is a picture of the tomatoes that I got from my neighbor on Halloween. They are ripening very nicely. I put them on a tray lined with newspaper and then put a newspaper on top. It keeps the gases in so they ripen faster. They don’t taste as good a vine ripened but they sure taste a LOT better than the store tomatoes!!

I like using those boxes you get at the grocery store with the 2 in. or so sides.Jill 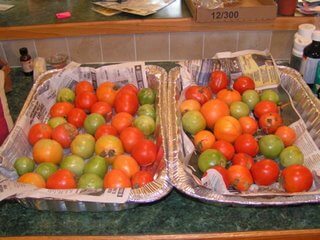