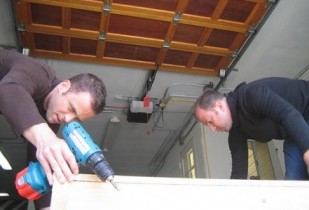 I’ve never been considered a mechanical genius. In fact, I was afraid to try virtually any do-it-yourself project as a teenager because I had seen my dad electrocute himself countless times on the simplest projects and I had concluded that do-it-yourself work was a dangerous business.

I tried a few car repairs when I was younger, but I had limited success, mostly with changing oil, belts and other simpler things. My dad and I once tried to change the water pump, but after spending two full days working on it, we ran into a snag and it ended up costing twice as much to fix what we did to it! 😉 After a few years, I tried again. I bought a new radio for my car and tried to put it in myself. My brother and I successfully installed the radio, but it would not work when we tried it. Finally, I realized that I connected the power to the wire from the light on the old radio and the new radio would only turn on when the lights were on, too.

Many of you may not have considered fixing things yourself, but most home repairs are easier than most people realize and a lot cheaper than paying someone else to fix it.

My first real attempts at repairing things came after we moved to Idaho. We lived in a pretty remote part of Idaho and it was nearly impossible to get a plumber or an electrician out there. One night while watching the Red Green show, I got inspired!

One winter, the true test presented itself. We had a faucet out in the yard sticking up from a metal barrel partly buried in the ground. One day during the winter thaw, we heard the sound of water running in the house. The outside faucet had frozen and the metal elbow behind the faucet had cracked. When the thaw came along, the crack produced a narrow gusher of water that had already flooded the yard around it.

It was the first day of a three day holiday weekend. The chances of getting a plumber were slimmer than usual. I had no tools for this kind of work and the nearest hardware store was 70 miles away. Somehow, I was going to have to do this myself.

After a lot of praying and pondering, I came up with some ideas. It just happened that Jill, who lived across the street from us, had the elbow piece that we needed to replace the broken one. Once I knew we had the part, I gave it some thought and figured out a way to remove the faucet using a piece of pipe, some inferior tools and some skills I learned watching "MacGyver." After that, it was simple to turn off the water, put the new elbow on the pipe and replace the faucet. That project saved us at least $200 if we could have found someone to do it at all. 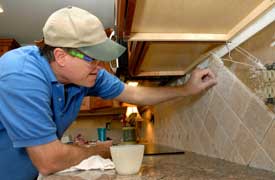 We recently tried blowing insulation into the attic of the older part of our home after discovering that there was only four inches of insulation up there (as opposed to the fifteen inches it should have been.) Had we had the work done by an insulation company, it would have cost around $2,000, but doing it ourselves, it cost us $250 and about 8 hours of work.

This type of project might at first seem too difficult to do yourself, but any time you consider the potential of doing it yourself, consider that there are lots of free resources on the Internet where you can learn what you’re about to get yourself into. In recent years, I have spend a small amount of time researching exactly what it will take to do a project before we try it. For the insulation project, I went to Lowe’s to check prices and to read the information on the insulation packages. Blown in insulation was much less expensive, so we decided to do that. We found that once you buy a certain number of bags of insulation that the store lets you have a 24 hour rental of the machine to blow it in for free.

The insulation that we planned to use was cellulose which is made from recycled newspaper. I was concerned about whether or not it was safe since paper burns more easily than fiberglass, so I went down to the local fire station and asked the firefighters. They said that cellulose insulation has a fire retardant to reduce the possibility of a fire and they weren’t worried about it. Also, between the firefighters and stories on the web, I learned that I shouldn’t blow the insulation on top of certain recessed lights.

Once we learned enough to feel comfortable with the project, we bought the supplies, including masks and goggles and did the work. It took us a total of 8 hours and cost just under $250 including all of the supplies, renting the Lowe’s truck to get it home and buying $7 worth of Chinese food at the grocery store since we were too tired to cook after doing it! It was messy work, but not especially difficult and we saved about $1750 over having an insulation company do it. Not only that, we estimate that we will save at least 200 gallons of propane a year, which works out to a savings of over $400 PER YEAR that we would have spent had we not done the work.

Some problems appear bigger than they really are. Last summer, we had to spend a lot of money having a new septic system put in at our new house. No, we didn’t do that ourselves, but I did stay around while they installed it and paid a lot of attention to how the work was done. Though I was sure that there was nothing wrong with the new septic system, we started to notice the smell of sewer gas around the outside of our house, which seemed to be coming from the sewer vents on the roof. The company that installed the system assured us that there was nothing wrong with the installation, but they couldn’t offer any insight about what might be causing the problem.

One day, we started to notice the smell inside the house and we were very unhappy about it. We found that the smell was coming from a drain in one of our closets. We called out three plumbers and they gave estimates ranging from $1000-$2000 each. Our dilemma was that each plumber had a different opinion of what would solve the problem, so we were pretty certain that if we spend $1000 or more, the problem would still not get fixed.

I thought that most drains were supposed to have traps, where a bend in the pipe allows water to stand and prevents sewer gas from coming into the house. One of the plumbers said that the drain in question did not have a trap, so we were surprised we had never smelled it before. When I thought about it, I realized that the only thing that put water into that drain was the air conditioner, which we had not used the previous two months. I poured a couple glasses of water down the drain and the problem soon cleared, meaning that there really was a trap and the water had simply evaporated, allowing the smell to come through.

We had solved the problem of the smell in the house, but we still had the problem outside. After spending a number of hours looking on the Web, I found a document explaining how the chemistry works in a septic tank. Without explaining all the details, the writer recommended flushing baking soda down the toilet each week. We tried it and it solved our problem completely. Rather than spending thousands of dollars, our total cost is 78 cents per week for system maintenance.

We once had a problem where our garage door opener would not work. The door was stuck in the "up" position. After I tried a lot of things, our son, who was 8 years old at the time, noticed that the safety sensor that prevented the door from closing when something blocked it was not lit, but he was sure it had been in the past. The sensor sends an invisible beam of light to another sensor on the other side of the garage door. I checked it and realized someone had bumped the sensor and the light beam was pointed the wrong way. After a small adjustment, it was fixed.

Some of our other do it yourself projects have included:

Some projects are definitely worth hiring a professional to do. I don’t have much patience with cars, so we almost always pay a mechanic to fix them. You will no doubt find that there are some things that are too much trouble for the cost savings, but if you have something that needs to be fixed, consider whether you can do it yourself before hiring someone to do it.

If you’ve never tried to do basic home repairs before, start with something small. Once you have successfully done some small things, you’ll have the confidence to try something bigger. One thing we’ve discovered is that a lot of the projects that we expected to be difficult turned out to be easy and cost us nothing.

If you’re saying, "That sounds like a lot of work," consider this: We saved $1750 doing 8 hours of work on the insulation project. That works out to $219 per hour. If you divide that by the fact that two of us worked on it, that’s $109.50 per hour we didn’t have to earn to get the work done. Another way to look at it is that assuming that I get paid $20 per hour, that’s 87 1/2 extra hours I DIDN’T HAVE TO WORK to pay for someone else to do it.

By repairing and maintaining things ourselves, we have saved tens of thousands of dollars. If we had paid to have someone do all of the things we have done, we would have had to earn more than twice our income every year that we have been married to accomplish the same thing.

Not only did we save a lot of money, but there is a tremendous amound of personal satisfaction in successfully completing a project. I highly recommend trying it yourself!

Winterizing and Preparing for Winter

Save First Buy Later
Previous article: Seasoned with Love
Next Post: Are You Afraid to Buy a House?