This is part 2 of our series on cheap wedding ideas to help you reduce your wedding cost. You can also read Cheap Wedding Ideas Part 1 here!

We paid almost nothing for the flowers even though we had lots of them. One of the best kept secrets is to go to a vo-tech school where they teach horticulture and flower arranging to get your flowers. Tawra bought the flowers there that the students had grown and they even arranged the bouquets, boutonnieres and corsages. It cost very little because they used the experience to train the students, all supervised by an instructor who made sure everything turned out well.

If you will be using dried flowers, don’t forget that you can go to some florists and at the end of the day they are usually very willing to give you the rejects from their fresh flowers for you to dry. Often, flowers that are no longer fresh enough to sell fresh make great dried flowers. 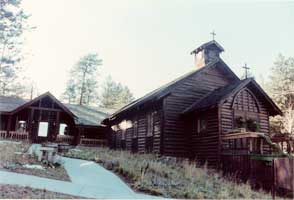 Since the church Tawra and Mike were getting married in was a log cabin in the Rocky Mountains, we saved quite a bit by using what we had on hand. We cut pieces of evergreens (for free) and draped them on the hand rails going into the church, on the pew ends and everywhere else on the inside. We added white Christmas lights that we already had, white bows, and bunches of dried flowers tucked in here and there. We threw in some white candles and it really looked amazing.

Tawra made two huge dried wreaths for the front doors of the church and that completed most of the decorating.

I have seen some beautiful and elegant weddings where the bridesmaids carried just one flower. This is one case where “less is more” really works and is one of the best and easiest cheap wedding ideas. Something so simple can make any wedding look very elegant. For my own wedding I was able to have a smaller bouquet because I carried a small lace covered Bible that my mom had carried at her wedding (and later, Tawra carried it). I also had my bouquet made so that it could be split apart; one part to toss to the single gals and the other for me to save. That saved us from buying an extra bouquet to toss.

Time Out: I know there will be some of you who will say, “None of these things will work for me. I don’t live in the mountains where I can gather evergreens, I don’t know of anyone who knows how to sew who can help me with my dresses, etc.”

I understand you won’t probably do exactly what we did, but I am giving you these examples to help you to start thinking of your own ways that you might be able to save, and part of that savings comes from using things from your own environment. Do you live by the ocean or where wild flowers grow profusely? Have an outdoor wedding by the ocean and save the expense of a building or use wild flowers as part of your decorating.

Where I got married, we had a strange but attractive thistle type weed that grew everywhere. For my wedding, we spray painted them to match my wedding colors and used them for pew markers and mixed them in the flower arrangements. If you have a wedding at a time when you have lots of cat tails growing wild, use them in your decorations.

If you don’t have anyone to help you sew, you may have to buy your dress but maybe you know someone who is a professional photographer where I didn’t.

If all else fails keep your wedding simple and small. That doesn’t mean that you are any less in love or less married. It will just mean that at the end of your honeymoon you will get to come home and start working on building a good solid marriage instead of spending all your time working to pay off thousands of dollars of debt.

Most of the time, the smaller the cake and the less elaborately decorated it is, the less expensive it will be. That’s not to say that you have to have a 6″ undecorated cake. One way to save on a cake is to have a reasonably sized main cake and then sheet cakes to serve to the guests. You also don’t have to have a cake where every inch of it is highly decorated. Like the bridesmaids carrying a single flower, some of the most beautiful cakes that I have seen have been where they were covered in plain white frosting with flowers laid on them.

If you want something more elaborate but don’t have the money to buy an expensive cake, you might consider making it yourself or having a friend or family member do it. If that doesn’t work and you have plenty of time to plan your wedding, you could pay for a friend, family member or yourself to take cake decorating lessons and make your own. Most people don’t realize that the cakes are usually baked far in advance of the wedding and frozen, with last minute touches added a day or two before the wedding. It is much less expensive to pay $25 for a cake decorating class than a couple of hundred dollars for a cake.

Decide how much budget you have to spend for the food and then plan accordingly. If you can afford a sit down dinner with lobster then so be it. If you can only afford cake and punch, that is fine too.

The main reasons couples overspend on the food at a wedding are that they are trying to impress the guests or that making it big it is the “in thing” and they assume that they have to do it. Neither one of these are good motives for planning the food for your wedding. Here are some personal examples that illustrate why.

At the time my daughter got married there were a couple of other weddings that the same group of guests attended. We could only afford to serve a finger food buffet with cake and punch at our cheap wedding. The other weddings had very nice and expensive sit down dinners. For a very long time after Tawra’s wedding, people would come to me out of the blue and mention once again how much more they enjoyed Tawra’s wedding compared to the other weddings.

They would always try and be nice about it but would say that, even though the other weddings were nice and beautiful, they really enjoyed Tawra’s because it seemed warmer, friendlier and more intimate. I was very surprised because some of the other weddings had cost thousands of dollars and were very elaborate ones with all the trimmings. Then I got to wondering why. (There I go thinking again!)

After thinking about my own experiences at weddings, I finally figured out that when the guests go to a sit down dinner, they spend a great deal of time at the one table talking to a hand full of people and maybe, if they are lucky, get to say a quick word or two the newlyweds. When we had our finger food buffet, everyone mingled. People were able to walk around and visit with many different groups other than the six or eight people they would have been locked in with while seated at a table. Another big plus was that the newlyweds weren’t sitting at their own special table, but were walking around totally accessible to everyone the whole time.

I’m not saying “Don’t have a sit down dinner or your wedding won’t be as nice.” What I am saying is that I wouldn’t panic if you can’t afford a fancy sit down dinner. Each arrangement has its own benefits and drawbacks and one is not necessarily better than the other. Again, it is not how much you spend that creates a special atmosphere, but how much thought goes into it.

They Lived Happily Ever After

Remember that starting married life can be stressful even in the best of circumstances. Don’t sabotage yours before you even get started by bringing unnecessary debt into the situation and causing even more stress. Now is a good time to learn and put into practice the verse that says “The wise woman builds her house but with her own hands the foolish one tears hers down.” (Proverbs 14:1) Spending more than you know you can reasonably afford is a perfect example of the warning in this verse. You know when you are spending more than you should but you do it anyway. If you do it, you are tearing your home and your marriage apart with your own hands. Don’t do it. Start now practicing being a wise woman.
Use these cheap wedding ideas to start your new family on the best foot possible!

Even with careful planning, most people’s budgets and guest lists tend to get out of control and sometimes even double in size before all is said and done. Be aware of that in advance and try to plan accordingly.

Remember that even though you want your wedding day to be the best, it is only one day but your marriage will be for a lifetime. Be sure you keep things in perspective about what is really important at this time when many others will try to drag you away from that perspective.

Read “How To Save Money On Wedding Food – Tips and Ideas”