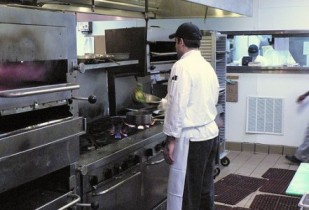 Au gratin – covered with a sauce, sprinkled with breadcrumbs, dotted with butter or fat, and browned under a grill – Cheese may be mixed with the sauce or the crumbs

Beat – with an electric beater or vigorously by hand

Blanch – dip food briefly in boiling water, then in cold water, usually to aid the removal of skin

Boil – use only sufficient heat to keep the liquid bubbling gently

Braise – cook on stove top in hot fat until browned, then add liquid and simmer

Brush – use a pastry brush to cover the surface, usually with egg or milk, before baking Coat – cover with a thin layer

Cream – beat shortening until it is of spreadable (creamy) texture

Dot – place small pieces, usually of butter or fat, on the top

Parboil – boil only part way, then finish cooking with some other method

Scald – heat a liquid to just under the boiling point, as to scald milk, or to pour boiling water on

Sift – pass through a screen to remove lumps

Truss – tie meat with string so it will hold its shape

Vinaigrette – a liquid mixture of oil, vinegar, and seasonings

Save Money In The Kitchen – Easy Ways To Save on Groceries

7 Ways to Save Money On Meat – Money Saving Meat Tips