Get Our New Planners, Aprons, Cookbooks And More!!
Up To 50% Off With Coupon Code NEWYEAR 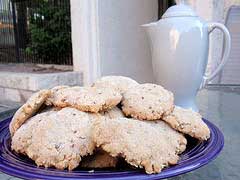 Saying I Love You with Food

In this day and age of fast food restaurants and convenience food, we tend to think that most people, when going through a hard time, don’t need a meal or a jar of soup brought to them.

Many years ago, before there were stores or fast food restaurants on every corner or microwaves in every kitchen, a neighbor bringing in a meal was sometimes a matter of physical survival. That isn’t usually the case these days.

Even so, I hate to see bringing a meal to someone who is sick, has just had a baby or has lost a love one fall by the wayside. We often think the person or family can just pick something up or cook something easy in the microwave. They probably can but there are a couple of reasons why it is still nice to bring someone a meal.

Usually at these stressful times people are exhausted, both physically and emotionally. When this happens it is so hard to think and make decisions. Just ask anyone who has Chronic Fatigue Syndrome. Trying to decide what to cook or buy for a meal can be very overwhelming. It’s often the straw that breaks the camel’s back.

Having someone call and say, "I’m bringing a meal for you tonight," can help so much to ease a persons mind, which is probably overloaded with other things. It is just one less decision to make.

Bringing food is a way of saying, "I love you," or, "I care." Food is comforting to most people. (I’m not talking about people overeating to comfort themselves so please don’t comment on that). Being a grandma, the minute I know the grandkids are coming, I get out the cookies and candy and, when friends arrive, the first thing I do is bring out a plate of cookies or put on the kettle.

Taking a plate of cookies to a new neighbor says, "Welcome! We are glad to have you!" Taking a meal to someone who is sick says, "I care." Let’s not let another way of saying, "I care," fall by the wayside.

I will try to share more ideas on this subject in a future post but, for now, here are a few suggestions to get you started:

I have so much more I can add but I will have to leave it for another time. Hopefully, this will get you started and help to decide whether or not you should take a meal and, if if you do, what it would be most helpful to bring.

Watching What You Eat but Still Overweight?

Getting Diagnosed with Chronic Fatigue Syndrome and Fibromyalgia