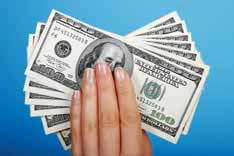 Whenever my daughter Tawra talks about how to live frugally, she can always count on one type of feedback — from people who say, “You don’t understand what it’s like. You have young children and not teenagers. Teenagers cost more!” Most of the advice and tips that Tawra shares come from me. I have raised two teenagers on a very minimal income. My main goal in raising my children was to teach them to become responsible and productive adults. By the time they hit their teen years, they were contributing to the household income, not depleting it.

I have never understood why people always say “wait until you have teenagers”. I waited and the huge cost that I had heard about never materialized.

My house payment was the same when I had babies as it was when I had teenagers. If the house payment changes, it’s not because of the age of the children but because we want a house that we think is better than the one we already have.

My utilities didn’t increase because I had teenagers. If anything they went down, because instead of having to fill a big tub full of water to give my little ones a bath, I taught my teens to take a quick shower, which used less water. I didn’t do as much laundry because I no longer had to wash diapers. Even when I used disposables, I still had to change my babies and toddlers clothes several times a day because they spit up on them, spilled things on them or had potty training accidents. If you have had a teenage boy, you know that until he got his first girlfriend, he would have worn the same clothes day and night if you’d let him!

I admit that I spent a little more on food, but even in that case it wasn’t so much more that it led me to financial ruin the way some people make it seem. When my granddaughter was born, my daughter spent more for her special formula then I spent on food for my teenage son!

As far as clothes go, I didn’t find teenagers much more expensive than young children. The cost for disposable diapers really adds up and since babies and young children grow quickly, you have to buy them an entire new wardrobe every 3-6 months. Once teenagers reach high school, they have pretty much stopped growing so quickly and many teenagers don’t wear their clothes out as quickly as young children.

I can hear someone protesting, “…but teens need to have special clothes so they can be like their peers!” I could write a whole book on this point alone, but let me just give you a few hints and ideas. First, you don’t have to spend a lot to dress nicely. There are garage sales, second hand stores and hand me downs. If you aren’t a snob about wearing second hand clothes, your kids won’t be either.

Make your teens feel loved and secure at home. You’ll find that even though the way they dress and look is still important, it won’t become the be-all and end-all of everything! Not only that, if they feel loved at home, it will go a long way toward keeping them out of the trouble so many parents dread.

I provided my children with the basics in their wardrobe. A pair of tennis shoes, dress shoes, three or four pairs of jeans, two pairs of dress pants, pajamas and some shirts. For anything else they wanted to have, or if they wanted to “upgrade”, they paid for those items themselves. They had to work for the extras by babysitting, doing yard work and finding other ways to get a little spending money. By age fifteen, my daughter was working part time at a hospital flower shop two evenings a week.

People often fear that working will negatively affect their kids’ grades. It won’t. Teenagers have more time and energy then they know what to do with. Why do you think drugs, drinking and the lazy party attitude is so rampant among teens? I’m not saying that they should work 40 hours a week, but a part-time job doesn’t hurt anything and it teaches responsibility! Generations past understood this, and expected their teens to work. They knew that it would prepare them for responsible adulthood. Recent generations haven’t taught this, which is why so many adult children mooch off of their parents.

When a child is born, we give him everything he needs or wants every time he cries. When he’s a toddler, we wouldn’t dream of giving him chocolate for every meal, even though he cries for it. Yet when teenagers whine and complain for something that they want, many people just buy it for them, instead of letting them work for it.

What an injustice we do our children when we give up the opportunity to teach them because we are tired of hearing their complaints and challenges. Instead of using their last years living with us to teach them to be responsible, productive, hard workers, we often teach them to be dependent. I know a good education can help a person get a good job, but that education is of no use in a job if the person isn’t a responsible, productive, hard worker with some kind of experience.

In the same way we teach a baby to go from milk to soft food to solid food we need to help our children to build up their “life’s muscles” concerning finances gradually. By the time the kids are teenagers, that will require some “heavy lifting” on your part. How wrong parents are to give their children everything they ask for. If you do, you will be wondering why your grown child won’t move out, why he can’t hold down a job and why he is such a poor money manager.

Incidentally, my teenagers graduated with As, my daughter received a scholarship to a university in Sweden and my son went to school to learn drafting. They are now very responsible, independent, productive adults and parents. Teenagers don’t have to cost more than small children if you are wise in the way you raise and teach them.

Update: This was written when I had little kids. I now have 2 teens. Do they cost more? No. My son has a job and is paying for his gas to go to work. They pay for their own cell phones, computers and any other “fun” gadgets they want. (no a cell phone is NOT a necessity for a teen. 🙂 ) We pay for the gas for them to go to school because it’s 30 miles a way. We do give them money now and then to do something fun with their friends but as a general rule really they aren’t costing any more. So in case you were wondering if I had changed my views on this now that I have teens, nope they really don’t cost more.

Paying Cash For A Car?

When to Buy New or Name Brand Goods

Daughters’ Financial Emergencies Cause Financial Strain
Previous article: Teaching Kids about Money
Next Post: Is It Wrong To Use Free School Lunches?