Spending habits determine whether we’re prosperous or always in financial turmoil. Here’s how I changed my spending habits and became smart about money. 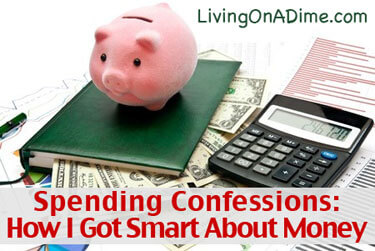 Spending Confessions: How I Got Smart About Money

One question people often ask is “How do I get smart about money and change my spending habits when my bills are out of control but I just don’t want to give up the things I want?” My husband Mike wrote about how he changed his thinking about his spending habits ang became smarter about money when confronted with this situation. Hopefully, his story will give you some measure of inspiration in your situation.

Being smart about money is a way of life. It does not mean giving up everything that you have or want, but it does mean that you have to be more selective about which things that you buy. When you have control over your money, you will not be a slave to your debt or your job and you will gain the freedom to live your life the way you choose. Being smarter with your money can be a choice or a necessity. For us, it was a necessity. Here is my story.

I have made a 180 degree change in the way I think about money. After college, I lived in my parents’ house while working the grocery store job I had worked since high school. I made $1300 a month at a time when I had no bills but I had terrible spending habits. I spent money to make myself feel good, eating out daily, going to movies frequently and buying a whole host of consumer items each of which only held my interest a few days. My frivolous spending was so out of control that this was not enough play money and I quickly spent $4000 that my grandmother had saved for me since I was a baby. Still, I did not learn and began charging my deficit on credit cards.

My first wake up call was when I was declined additional credit after maxing out all of my credit cards. When I moved out of my parents’ house, I had a very difficult time managing my money. I was able to pay only the minimum payments on my credit cards and resented the evil credit card companies who had done this to me, not admitting that my poor spending habits were the problem. I realized I needed to get smarter about money but didn’t know how to do it.

When I got married in 1994, my wife and I disagreed about money. I thought it was everyone’s “right” to have some money to play with, but she had lived most of her life with no money and wanted to eliminate every bit of unnecessary spending so that we could pay off debt. As we slowly paid down some of the debt, I began believing more that Tawra’s methods could improve our financial situation, but I was still unhappy about giving up the fun stuff.

In 1996, we moved to Idaho for a job that fell through when we arrived. We had no money, I had no job and we were in a small town a long way from a city. We had no money but were determined not to charge anything. We gave a lot of thought to our spending habits, carefully considering which items were needs and which were wants. We did not have a lot of basic household items that most people take for granted. We did not have a refrigerator or freezer. It was winter in Idaho so we stored our cold items outside in a utility shed. One day, some cats got into our shed and tried to eat our last two pounds of round steak, leaving teeth marks in the frozen meat. We anguished over whether we should throw away the meat, but since we could not afford to get rid of it, we cut off the bite marks and cooked it anyway. This was the beginning of my turnaround.

I got a job and we bought a small and very inexpensive house. We cut our own wood for heat, planted gardens and slowly worked to pay off the debt. We scavenged a lot of garden material (pots, potting soil, bricks, plants, etc.), used building supplies and furniture from dumpsters outside of our town. We even made some money selling dumpster finds at garage sales. Along the way, we had two children and incurred some unexpected medical bills. Still, we were able to pay off $20,000 in debt in the first 5 years we were in Idaho while averaging $22,000 per year.

There was one more incident that made me realize how completely I had turned my thinking around. Tawra’s family gives money at holidays instead of gifts. Since we had cut all of our unnecessary expenses, this money was all we had to buy ourselves “fun” stuff. At first, I bought myself a few CDs and some other items that I again lost interest in quickly. I decided to save for a bigger and better item, but after saving the money, I was unable to bring myself to spend it. I asked myself “Do I really need this?” and “What if something better comes along?” I have since joked with Tawra and her mom that they ruined me since now I can’t even bring myself to spend the fun money!

This might sound like a negative thing but it’s really quite the opposite. Becoming smart about money and not buying all those things that don’t really add any joy to my life has actually made me a happier, more content person.

When I originally wrote this article, I earned $1700 a month which we used to support our family of four (Tawra, myself and two pre-schoolers). We now laugh at the fact that I came from a mindset of being unable to make it as a single person with no bills and a $1300 a month income to being able to support a family of four on $1700 a month simply by changing my spending habits. Take heart anguishing spendthrifts! It is possible to change and be smarter with your money. It takes a little time and determination, but it is definitely worth the effort.

In the years since my original version of the story, our income has increased, but so have our expenses because we have a larger family with older kids. We do have some wiggle room to be able to buy some things occasionally just because we want them but, even now, I find myself asking, “Will I really get that much joy out of it that it’s worth spending that much?”

A great side effect is that it is much less stressful managing and storing “things” we don’t really care about (and when we last moved, we were able to move our family of 6 in just one moving truck).

By choosing wisely, we have been able to use the money for other things. The last time we moved, we put a lot of money down on our house so our mortgage payment is much less than most of our neighbors, which makes our budget easier. Also, we have recently had a couple of large unexpected expenses (unexpected school costs over $1000, driving teenagers, etc.) but because we have chosen more wisely with other expenses, we were able to cover the cost without having to borrow.

For example, when we needed to put in a sprinkler system (required by our homeowners association), we did the math and the cost to have someone do it wasn’t that much more than just buying the parts to do it ourselves. I was injured at the time and overwhelmed with other projects, so we thought it was worth paying someone else to do that job.

At times, we will find a product or a book that will make some part of our business or personal life easier and if we can see how the cost will be less than the long term benefit, we will buy it.

We have no debt except the remaining part of our home mortgage and we never carry balances on credit cards. We do keep 2 credit cards, one for the business and one for our personal stuff, each of which we pay before the first bill comes due. We only use these cards for Internet purchases or other times when we’re hesitant to use debit but we never use them to borrow money we don’t have and we never pay interest or fees for any financial transactions.

The point is, if you really weigh needs vs. wants, spend a lot less than you make and avoid debt on personal “doodads”, you can eliminate unnecessary debt and build up enough cash to be able to buy that thing that you occasionally really need or sometimes just want without having to borrow– and it REALLY makes life a lot less stressful.

If you often wonder where all of your money goes and need help learning to be smarter about money, check out Dig out Of Debt and learn more about how to keep more of your money.