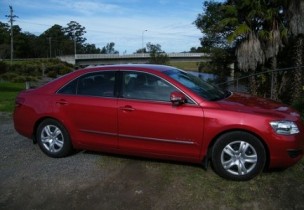 Hi. I am recently living on my own with my two children, 15 & 12. I was married for 23 years and totally blown away when my husband asked for a separation. It was initiated by money problems. I made a big mistake by agreeing to file bankruptcy so my credit is shot. I don’t receive any child support and basically let him have everything. I thought we were going to work it out but we didn’t.

Your web site and cookbook have helped me tremendously. I am living very frugally now.

I have one big problem. I have a leased vehicle payment of $650 a month and two more years on the lease. I’m upside down in the lease as well. I would like to trade the van and buy something else. Something that I can pay for and keep for several years. Do I have to go back to the same dealership I leased the van from to trade it in? I have been unable to get a straight answer anywhere. I know they’re making money on me. Big money. But the $650 a month payment is killing me. Unfortunately, I don’t live near public transportation. I would appreciate any suggestions you could give me.

In a perfect world, we’d probably try to get out of the lease as soon as possible. I looked at a little information on the Internet and it appears that most leases have a provision for early termination, but that the fee associated with that can be thousands of dollars. I would check your lease contract to see what it says about early termination.

If you want to trade the vehicle, I would avoid getting into another lease. It is possible that the dealership where you leased the car may waive the early termination fee if you trade for another vehicle with them. If they say they can do it, make sure that they’re not just taking the penalty and adding it to your new loan. If they do, you are not saving anything.

If you trade it at another dealership, they will probably do it, but I’d expect that they would pay off the lease termination fee and then add it to your new loan, meaning you’d be in the same dilemma for longer.

Read your lease to see what it says about early termination. It is possible that if you called them and explained your situation, they might let you out of it. I wouldn’t count on it, but it wouldn’t hurt to ask. If it costs you $1000 to break the lease, but you can get another vehicle that will cost you $250 per month, you’d save $400 per month and the $1000 would be paid after 2 1/2 months.

If you can get out of the lease, I’d try to buy a used car from another person and not from a dealership. Dealerships charge more (even for used cars) to cover their administrative costs.

Once you know what you’re up against, I’d do the math for all of the possible scenarios (i.e. keep the car until the lease expires, break the lease,pay the fees and buy an inexpensive used car, trade the leased car for the van you wanted, etc.) and see which one will end up costing you less.

I wish we could have given you more specific information, but as I mentioned we have no experience with car leases. It seems unnecessarily complicated (probably so you’re too confused to understand what they’re having you sign).

I hope this helps!

Pay Off My Car or Put the Money in Savings?
Next Post: Get The Most Money Selling Your House