Should You Move Your Stuff Or Sell It?

I just thought you might be interested to know  that eBay Classifieds did an infographic called “Is moving your stuff worth it?”

Basically, it says that you could save money when you have to move by selling your things on eBay Classifieds, then buying similar stuff once you’ve moved to your new place. It also shows the carbon impact of moving a house-full of stuff across the country. 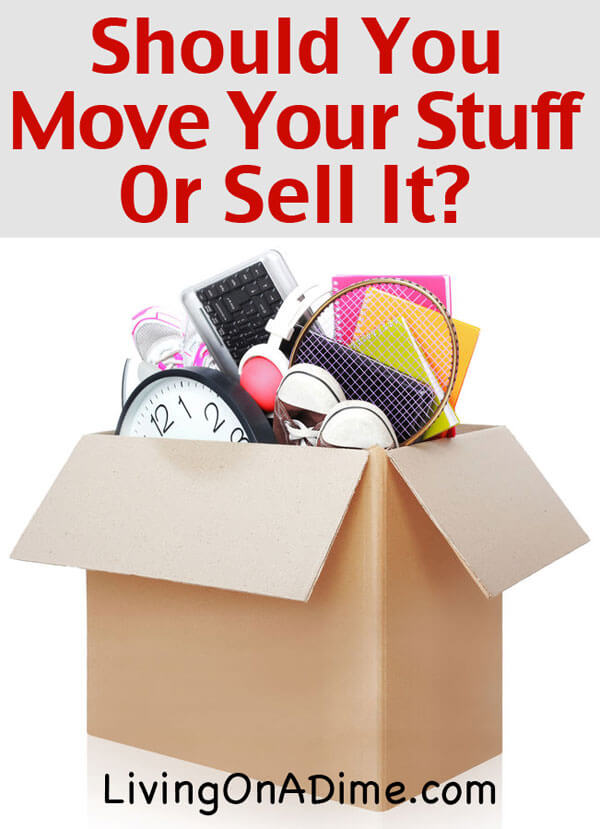 Its funny that you sent me this article. The truth is, I sell almost everything, as far as furniture goes, when I move. I sell all the bed frames, dressers, kitchen table and chairs, entertainment center, computer desks, cabinets everything. The only things I move are our mattresses, and my family heirloom antiques that I love.

I’ve moved the antique heirlooms from one end of the country to the other for the last 13 moves. I figure if my poor husband and brother are going to have to lug around those heavy antiques then I need to make the rest as easy as possible.

Also, I like to get new stuff. I have bought all of our furniture from garage sales (except our current couch and our bed) and I usually sell them for the price I bought them for or more. I don’t feel any guilt at all in re-selling it,  and then buying furniture that’s new to me.

This move will be even better because the garage sale season will just be starting in Colorado when we get there! 🙂

Even though we’ll be getting rid of most everything we are still going to need a huge U-haul. The items I am taking are large and heavy– An 1800’s roll top desk, my parents’ player piano (they used to manufacture parts for player pianos), an old oak table, a secretary, a Victrola, and all my gardening stuff (which is the most important of course!).

Yes, it is mildly a pain to have six people eating off of a card table until I find the “right” kitchen table and chairs or sitting on the floor to watch TV until I find a couch but it’s usually for not more than a month.

As for carbon footprint, that’s not a consideration for me since I don’t believe in that stuff. For me it’s all financial and I just want a new look in a new house, again. Besides, I bought mostly used each time.

One thing I have found in my moves is, more often than not, the furniture that fits perfectly in the house I have now and suits my needs now doesn’t fit quit right in my next house.

This is especially true because my house style changes from one move to the next. The things I had in my 1917 era 2500 square foot house didn’t work or look right in my 750 square foot one room log cabin and now nothing I have works at all in my 1950’s track house.

There are other considerations, too. The house I am in now has just two four by two foot closets in the whole house– no other closets or linen closets so I need lots of shelves and free standing cabinets. My next house may have a couple of walk in closets and lots of storage.