How to cope with Chronic Fatigue Syndrome and Fibromyalgia

You can read Part 1 in our series About Chronic Fatigue Syndrome and Fibromyalgia.

How We Live with Chronic Fatigue Syndrome and Fibromyalgia

Things that make my Fibromyalgia  worse:

Lack of Sleep
Stress
Too much exercise like climbing the stairs in our old bi-level house. (BIG MISTAKE!!!)

Things that seem to help Fibromyalgia

Taking a regular Alka-Seltzer, not the ones for cold.
Sleep
Air Bed may help. It did for me for a while but now I’m sleeping on my $20 garage sale couch because it’s easier on my muscles.
Pain medications (over the counter or prescription)
Stretching
Reducing stress (Ok, I know MUCH easier said than done but do what you can.)
Massage (I am lucky that my husband has learned how to do it for me so I don’t have to pay $80 a week to go once a week!)
Neuromuscular therapy works best for me when I have someone else do it.
Hot Baths (I have to take one almost nightly to ease the pain enough for me to sleep.)
Ben Gay Cream
Heating Pads
Resting, just sitting and reading or watching TV. 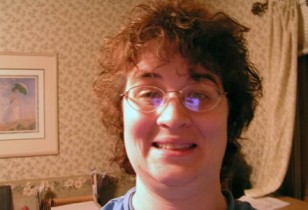 And yet, another rough day in the life of Tawra with CFS.

Taking NADH – This is a supplement sold though http://www.immunesupport.com . This is the only thing that I have found helps me. It did not help my mom or brother at all. It did give me more energy and made me feel a little better. It is fairly expensive ($40 a month) but worth it if it works. If it doesn’t work after a month or so, stop taking it, it’s probably not going to work for you. It DID NOT cure me. It only made it so that I have a little more energy and my Chronic Fatigue Syndrome wasn’t quite so bad.

Cutting out gluten. This helped me but not mom or my brother. You might check for food allergies as they can make symptoms worse.

Cutting all social activities (I keep it very limited. I have one friend and I see her for a few hours every 2-3 months)

Getting Sleep (With 4 kid that’s the same as impossible, even with my husband getting up with them at night.)

Cool, dry climate – I felt much better in Colorado and Idaho than I did/do in Texas and Kansas. Some people report also feeling better in places like Arizona and Nevada.

Running the Air Conditioner- Removing the humidity from the air helps a lot.

Eating on Time – I get very sick if I don’t eat on a regular basis. I really go downhill fast. My husband can usually tell and forces me to eat something, even if I’m not hungry. It helps a lot to eat every two or three hours.

I have recently cut out most of the sugar. It has helped a lot, especially with brain fog and low energy. It was NOT easy at all to do, but I felt it was something I had to do. I am still working on not back sliding.

Wearing all cotton clothes – I feel like I’m going to “crawl out of my skin” if I don’t wear cotton. I don’t know why but I think it’s because I get hot in anything else.

Bee Pollen, Vitamins, Anti-depressants, Fish Oil, etc. have not helped me one bit.  The bee pollen even made mom worse!

These are things that seem to help so far.

First, you have to realize that you are sick. Once I stopped fighting being sick, started using my energy on other things and worked with it instead of against it I started doing much better! I’m not healed but I went from being flat in bed to at least being able to do the dishes during TV commercials.

I stopped gardening (my favorite thing to do) when I moved to Kansas. It just makes me too sick to work in the heat. Now I am doing small amounts of gardening as I can, mostly in the spring and fall.

My kids can do one outside the house activity at time and that’s it. Swimming lessons, karate, music– We allow only one.

I often have cable TV. Now I don’t normally advocate cable if you can’t afford it BUT in this case I think it really helps. When you are chronically ill, it really helps to take your mind off the pain. Sometimes you get so overwhelmed that you need a break and this helps. I don’t watch things like soap operas or daytime talk shows. I watch HGTV, Discovery Channel and other things that keep my brain focused on something productive. I try to be careful, though. I really enjoy doing home improvement stuff so it can get discouraging if I watch too much and can’t physically do it. Don’t watch junk. You don’t need to be filling your mind watching scandalous stories about what other people (who aren’t real anyway) are doing.

My husband does a lot of the hard things like scrubbing the tub and shower, and vacuuming.

I clean in spurts. I do something for a few minutes, then quit and do something else. My house is never spotless but it is mostly picked up and neat.

My kids take a nap whether they are tired or not. They play in their room quietly for at least 1 1/2 hours after lunch. They also go to bed at 7:00 p.m. I really need the break and, by that time of night, I am just too tired to do anything anymore. They usually play quietly (or not so quietly sometimes! :-) for an hour before going to sleep. This isn’t just for me. In my opinion, most kids stay up way too late these days!! Except for special occasions, kids under 12 should go to bed no later than 8:30 p.m. Frequently, kids are grouchy and have bad behavior because they are tired (off track, but that’s my two cents).

A word about disability. I went on disability when I was 20. I used my own Social Security because had I worked since I was 15 and had enough credits. If I would have gone on my dad’s Social Security, I could have gotten $700 a month instead of $300 because I was under 21. Another big mistake, but we didn’t know at the time.

Anyway, I got on disability in 1991 when no one believed in Chronic Fatigue Syndrome, let alone in a 19 year old having it. IT WAS A MIRACLE I even got on! I DID NOT want to go on disability. I felt like I was giving up by doing it but I really had no choice. I had no medical insurance, couldn’t work even though I had tried to “force myself” to work, so I really needed help.

Now it is much easier to get on disability. I would say if you can, start applying as soon as you realize you can’t work any longer. You can always go off if you start feeling better. It still takes a long time to get on. You will be denied several times and have to appeal. It can take 2-3 years to get on sometimes. I have tried to work many times (at least 10 different jobs) in the last 22 years and I just haven’t been able to do it. Even with the website and book, I only do it about 5-10 hours a week now, which is why we haven’t made a very solid income from it yet. It is work like anything else and I just don’t have it in me to work 4-8 hours a day on this business.

I hope this helps give you some insight on Chronic Fatigue Syndrome and Fibromyalgia. There is a lot of information available on the Internet. Be careful what you believe and REALLY read up on some remedy ideas before you give it a try. Many people will tell you their product will cure you because they’re just trying to sell something. Not everything will work for everyone and not everyone will want to deal with the side effects of some things they try.

If you want even more information, Mom has written an e book, Common Cents When You are Sick, which goes into great detail about how to cope with not only FM and CFS but when you are sick in general.

Hot water can make CFS patients weaker. For example I took a very hot shower once when I first got sick and I became so weak I couldn’t turn the water off or get out of the tub. I was alone and it was a scary feeling. The same thing happened once when I got into a hot tub.

When I drive I can’t have the radio on, the windshield wipers running and someone talking a lot to me all at once. Too many different noises and activities make things worse, so I try to drive without the radio and avoid rush hour traffic.

I read a book on Multiple Sclerosis once and was surprised how many things that affect the muscles of an MS patient affect me too so I try doing some things they suggest to help MS patients.

Massages are a nightmare for me. Anything that messes with my muscles (exercise, excitement etc.) causes me to be weak and sick for quite a while.

We have included so much more in our Common Cents When You are Sick e-book– things like what I had to do with the clothes in my closet so I wouldn’t become overwhelmed.

Not everyone is alike and not everything works for everyone, so just try different things and see what helps you.

As Tawra said, many things that worked for her didn’t work for me. When I first became sick, I got really bad cold sores all over my lips like nothing I had ever had before.

She told me Lysine is a little known secret that helps with viral infections. She said the pharmacy companies don’t want people to use it because it doesn’t cost as much as cold medicines and they would lose a lot of money if people didn’t have as many colds. Whether this was true or not I don’t know but it does make sense to me and I do know it helped somewhat to control my CFS.

I also find it interesting that researchers have now found that CFS is probably caused by a virus, which would explain why the Lysine is helping me.