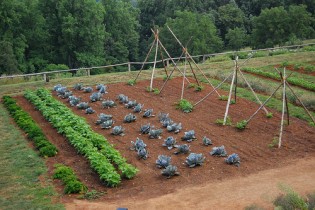 First Time Gardeners and Me

I know there is still snow on the ground but most avid gardeners are pulling out the seed catalogs and planning their plots.  We are starting to get questions about gardening so I thought now would be a good time to post this.

I am not the gardening expert– Tawra is and I mean she really is. She has a certificate in Horticulture and she has worked for county extensions and the botanical garden here in Wichita. Gardening is her thing. I, on the other hand, know nothing. That has not stopped me from trying for many years to have a garden and flowers but, most years, I failed.

Tawra said the other day that she was going to water her plants and I asked, “You’re supposed to water them?” Maybe that has been my problem. I just wait for it to rain. HA!HA! Needless to say, I drive my poor daughter crazy with my gardening habits. I just thought I would tell you what I did wrong so you could learn from my mistakes.

First, gardening takes commitment. No matter how bad she feels or how hot it is, Tawra goes out every day and waters her plants and takes care of them. In my case, if I don’t feel good I think, “It won’t hurt them to go without water one more day, even if it is 100 degrees outside.” Then the next day I simply forget to water them. By then I know they are a little brown and crisp but maybe if I drown them they might come back. NOT! (Tawra is now shaking her head!)

Whether you feel like it or not, you have to water your garden, feed the plants, deadhead them, pick the bugs off of them and do it all, even in horribly hot weather. You’ll even have to sweat while you are doing it. 🙂 It takes commitment.

Second, you can get a lot of crop from one little plant. Most beginners set out 10 tomato plants for a family of four, not realizing that two or three plants could easily supply them with plenty of home grown tomatoes. The first year I planted flowers a neighbor gave me a large three pound coffee can of Zinnia seeds. I didn’t know any better, so I poured the whole can on a ten foot by one foot area.  For you beginners, that was enough seed to supply all of Texas with flowers. Not knowing any better, I planted them where there was no sun and I ended up with about four six inch flowers. I guess some flowers need sun, too. But then some don’t. It’s very confusing. (Note from Tawra: See what I have to put up with!)

The one cherry tomato plant I planted turned out differently. It wouldn’t stop producing tomatoes. To this day (35 years later), I usually pass on the cherry tomatoes. We had them coming out of our ears. Think small and few when you start. Plant just one zucchini until you understand the full potential of what one zucchini plant can do. Some of them can produce enough to feed an entire third world country for a year.

Third you won’t be able to have a manicure until October. No matter what gloves I wore, I still broke a fingernail and had dirt under my nails. Yes, I did try scraping them on a bar of soap. All that did was give me dirt and soap under my nails. A true gardener like Tawra doesn’t bother to wear gloves. (Note from Tawra: …and I have no nails to prove it!)

Fourth: That first year I envisioned my table spread with luscious home grown vegetables. I envisioned opening my cabinets full of rows and rows of my own canned fruits and vegetables saving us tons of money. The reality was that I spent four times as much on seeds, fertilizer, mulch and water than if I had bought the beans, peas and other vegetables at a gourmet grocery store. Not only that, after hours of back breaking work, I was about to harvest the fruits of my labor when we had a flood that destroyed half of my crop. Two days later, our new large puppy ran through it and managed to wipe out the other half. (Mike slaps his head, wondering how he ended up with a Mother in Law like this.)

I didn’t give up, though. Year after year, I kept trying and year after year I kept failing. One year I did finally have success. I had cleaned my garden up the previous fall and had thrown everything into the compost pile. The following spring, I decided I would give up. Would you believe that I had the most beautiful tomato plants growing in my compost pile? Go figure.

Of course I wrote most of this to be funny even if it was all true. There really are some upsides to gardening (so I have heard:) and it was fun trying. As bad as I make it sound, it does get easier if you keep at it and figure out what you are doing. Tawra has a great web site on nothing but gardening, called Cool Garden Ideas and check out other ideas about how to successfully start a garden or yard on this site. Hopefully her advice will help you avoid the garden nightmares that I did.

Note from Tawra: she really does call and ask, “Why are my plants dead?”

Me: “Mom, it’s been over 100 degrees every day for the last week. You HAVE to water them.”

See what I have to put up with!! It’s going to be all fake flowers and fake grass when we get her to Colorado!

Plant And Grow Green Onions To Use In The House

Recycling In The Garden