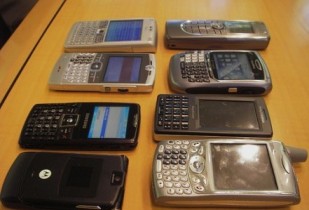 Don’t Buy In! How To Avoid The Trap!

Did you know you need a new cell phone? Did you know your car is trash? Did you know you’re not pretty enough, you’re overweight, you wear outdated clothes, you need to eat healthier and you need two large pizzas? If you didn’t know that, brace yourself because that’s just the beginning of your troubles — or so say the messages bombarding virtually every one of us every day.

Do you realize how much advertising you are subjected to each day? There are ads on television, ads on the radio, ads on the Internet, ads in the paper, in magazines, along the side of the road and on other vehicles. There are ads in virtually every business you walk into each day and there are ads all over your house. The next time you go to Wal-Mart, pause at the front door and take a careful inventory of all the advertising you are exposed to in that one location. There are hundreds, possibly thousands of print ads competing for your attention there. Wal-Mart radio plays a constant barrage of advertising trying to influence you to buy something. Many of the items available for purchase practically cry out to you to purchase them through advertising on the packaging. Even if you are the queen of frugality, you cannot help but be influenced by this daily barrage of advertising.

What many people don’t know is that the basic purpose of advertising is to persuade you to buy something you didn’t know you needed before you saw the ad. The message isn’t usually, “Hey, if you have a few extra dollars, you might enjoy this product.” The typical advertising message you hear really says something more like “Even though you never needed this product before, your friends and family will reject you, you will encounter daily torment, you will discover that you have no value as a human being and that you will probably die if you don’t buy this product right away!”

As competition for your attention gets more and more fierce, you get bombarded with more and more types of ads and more intense ads. It is like standing in the middle of a crowded group of people where each one is yelling at you trying to get you to pay attention to him. As time goes on, the whole group begins yelling louder and louder because each person is trying to out-shout the rest of the group.

Have you noticed an increased intensity in advertising during your life? I remember when grocery companies first used advertising on the back of register receipts. Then, one day, the store added mini-billboards to all of their shopping carts. Then they added advertising to the shopping basket carrels in the parking lot. At the time, those seemed like innovative ideas. Now, they just get lost in the “muck” of advertising. Recently, I was filling up my car with gas in Colorado and discovered that since I was last there, the gas station added video screens at the gas pump so that they could hit customers with a fresh barrage of advertising during one of those rare moments of near silence that many of us ever get. I heard today that a company is now trying to sell grocery stores on the idea of advertising actually printed on the conveyor belts where you set your groceries while you wait your turn in line. I don’t know who will be the first company to actually believe that that will be an effective way to make sales in a spot where customers are already overwhelmed with so many competing messages. At our grocery store, we are already assaulted with messages from tabloids and magazines with headlines designed to suck us in with the shock value. There are ads on the little dividers we put between our groceries and those of the next person in line. Is it really necessary to add yet another layer of mind “noise” to our lives?

I already mentioned that the purpose of advertising is to persuade you to buy something you have never needed before. Did you know that the main purpose of the media is to sell advertising so you have more urgency to buy something you have never needed before? Oh, you thought that the purpose of television was to entertain and inform you? Think again! Television shows are only produced to act as the “sugar” to get you to take the bad tasting medicine. You may wonder how I came to think this way. I have a four year communications degree, having majored in Radio, Television and Film. The principle that television and radio shows exist as a means to get people to watch ads was a major concept in the Radio, Television and Film program.

Read Part 2 – Advertising is Just Part Of The Problem