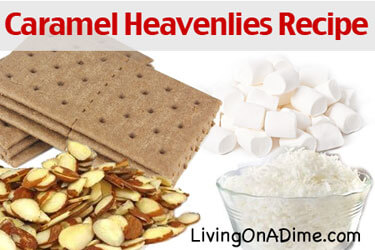 This caramel heavenlies recipe makes a quick and easy coconut, marshmallow and almonds cookie that is so delicious you’ll have trouble eating just one!

Line a 15 x 10 x 1 inch pan with foil. Lay graham crackers in the pan so they are touching. Sprinkle with marshmallows. In a saucepan, melt butter, sugar and cinnamon together until sugar is dissolved. Remove from heat and stir in vanilla. Drizzle over marshmallows. Sprinkle with nuts and coconut. Bake at 350 degrees for 14-16 minutes or until lightly brown. Cool. Then cut into squares or pieces.

Warning : ) These caramel heavenlies cookies are to die for. This is one of those recipes where you can’t just eat one, so if you are on a diet don’t even go near them. I usually have pretty good self control when it comes to cookies but I embarrassed myself by eating about 8 of these at one sitting! I couldn’t believe I did that!