This oven cinnamon toast recipe is one of the kids’ favorite breakfast items! It’s a great way to get a nice crunchy top but the bread still stays soft.

For the last 40 years, mom has made broiled cinnamon toast for the kids. She would spread some butter or margarine on the bread and then sprinkle it with cinnamon and sugar. Then she would put the cinnamon toast under the broiler and let it cook until the butter melted and became bubbly. This is one of the kids’ favorite breakfast or snack items. It’s a great way to get a nice crunchy top but the bread still stays nice and soft.

Now that my kids are older, they can make the broiled cinnamon toast themselves. This is great, but when they make it mom’s way, I always find this mess all over the counters and floors. As a mother of 4, this is VERY annoying! Yes, I always make them clean it up but it never fails– Someone always “forgets”. 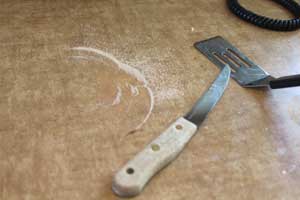 One day I was in the store and saw pre-made cinnamon and sugar butter. I did a double take because I couldn’t believe it! First it was a “Hello, why don’t I do that?” moment for me quickly followed by, “Why would someone pay $3.50 for pre-made cinnamon butter?”

So I came home and killed two birds with one stone. I made a batch of the cinnamon butter, saving myself $3.50 (OK, I wouldn’t have spent that much in the first place :-) and stopped the “clean your mess off of the counter!” problem at the same time. 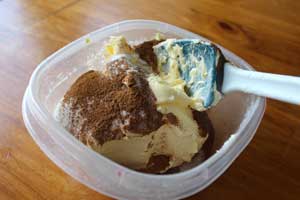 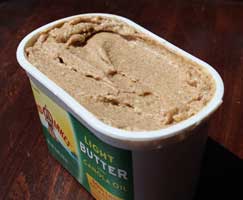 The best part is that it’s SUPER EASY!!! This really takes less than one minute to make!

If butter is not softened, either microwave it for 8 seconds or leave it on the counter for several hours to soften. Then, add the rest of the ingredients and mix together. Put in a container and store in the fridge. When you are ready for cinnamon toast, just spread on the bread. Place on a cookie sheet. (I use a Silpat and just wipe off the crumbs when cool.) Place under the broiler and a WATCH until the tops become bubbly and start to look crispy. Then remove from the oven before they burn.

That’s it! I’m not kidding when I say my kids will eat an entire loaf of this for breakfast (I have 3 boys and 1 girl). Just add some scrambled eggs and fruit and your breakfast is well rounded, easy and you are out the door for school!

One note of warning: I would only let older kids do this themselves as there is the possibility of getting burned on the broiler if they’re not careful.

Living On A Dime To Grow Rich On Instagram

$22 large planner I only have one. If you want it