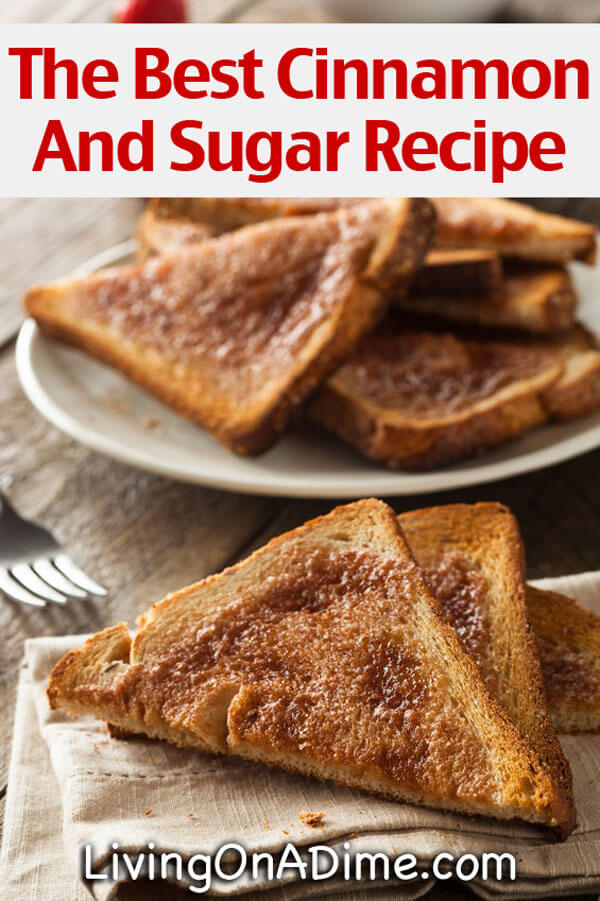 This quick and easy cinnamon and sugar recipe is great for toast, applesauce, cereals, fruit, baking and a lot more! Don’t buy the expensive pre-mixed stuff at the store. You can save money making it in 1 minute at home!

The Best Cinnamon And Sugar Recipe

We make a lot of cinnamon toast at our house. It’s our #1 requested breakfast food around here because the kids love it so much. (No, that’s not ALL I feed them, so don’t e-mail about that, please!) Most mornings I’m not feeling well so it’s easy just to whip up some quick cinnamon toast. In order to make it quick and easy I always keep pre-made cinnamon and sugar on hand and the best part is, I’ve never ever purchased pre-made cinnamon and sugar.

Homemade cinnamon and sugar is one of the easiest things to make. It literally takes about 1 minute to make and lasts a month to a month and a half at our house in a big spice container. I just use an old garlic spice bottle– a big one like you get at a warehouse store or in the bulk section of your grocery store.

To get the smell out so it doesn’t “contaminate” your cinnamon and sugar, just pop the top off, fill with a tablespoon or so of baking soda, fill with water and shake. Let it sit overnight and the smell should be gone. If not, do it again. Of course, I had only had a garlic bottle but if you have any old spice bottle that was filled with something like nutmeg or cinnamon, then you wouldn’t need to do this part.

Mix in a container with a fork to break up sugar clumps and then, using a funnel, spoon into your shaker. Adjust the amount of cinnamon to your taste. Start with the 1 Tbsp. first and, if it’s not enough cinnamon for you, then add more.

I will be honest and say I don’t ever measure. I just dump some sugar in my bottle, then some cinnamon and shake. Add more sugar and cinnamon and shake again until the bottle is full.  After making this for 20 years I know about the color it needs to be for the amount of spice we like now so I don’t mess with mixing it in a bowl first.