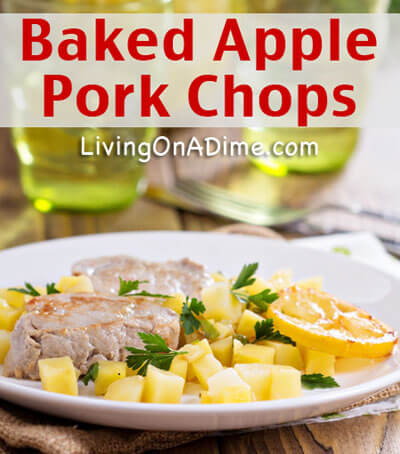 Try this easy meal including a Baked Apple Pork Chops Recipe and a tasty Cinnamon Roll Bread Pudding, which is a great recipe for holidays or family brunch!

Grease a casserole dish or pan. I like to use bacon grease for this. Place pork chops on the bottom of the pan. Sprinkle with salt and pepper, top with apples and sprinkle with brown sugar, cinnamon, and nutmeg. Sprinkle small chunks of butter over the top of everything. Cover and bake at 375 degrees for 45-60 minutes until pork chops are fully cooked.

This cinnamon roll bread pudding recipe would be a great recipe for Christmas, New Years morning or company brunch. You could dry the cinnamon rolls out a couple of days ahead of time and place them, ready to go, in a baking dish. Then, the night before you plan to prepare it, mix up the rest of the ingredients. In the morning, just pour the liquid sauce mixture over the rolls and pop them in the oven. Your family and guests will love waking up to the smell of cinnamon roll bread pudding. For Christmas, serving it with a sprinkling of cherries would give it such a nice festive look.

Serve with whipped topping and additional toppings like chocolate, strawberries or cherries.

Snickers Dessert Recipes – Ways To Use Leftover Candy Bars
Next Post: Herb Guide – Which Herbs Go Well With Which Foods?