Here are some ways to save money on Christmas gifts and cut stress during the holidays. You’ll never think if gift giving in the same way again. 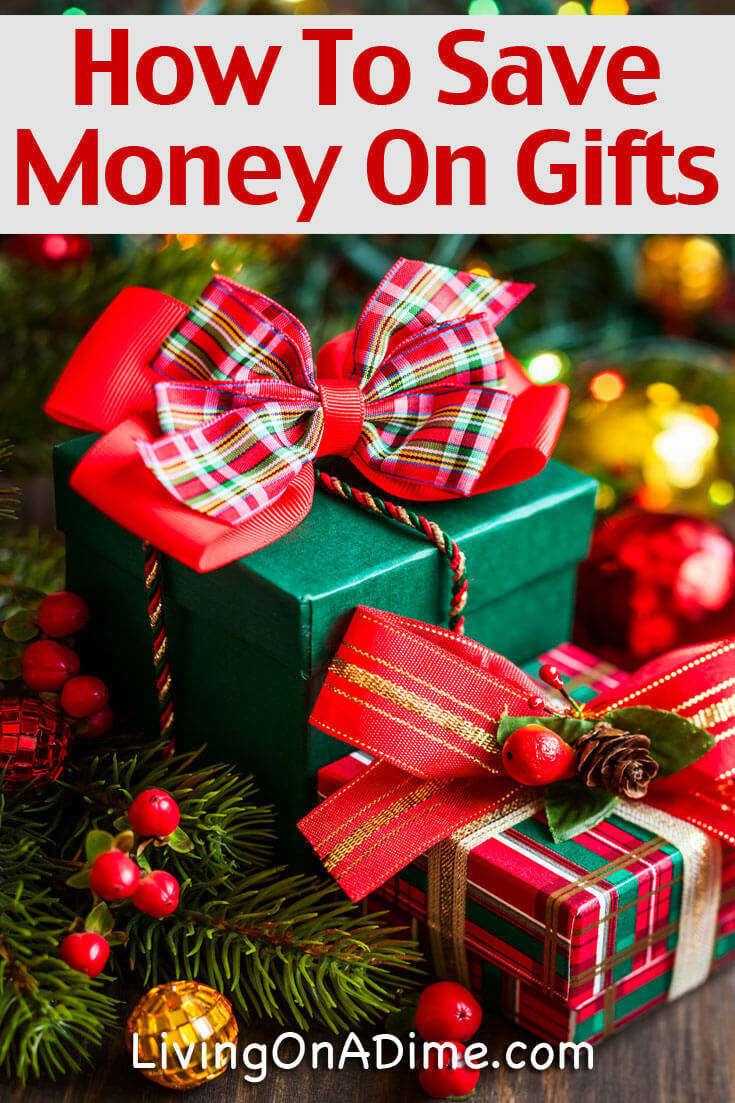 How To Save Money On Christmas Gifts

One of the greatest freedoms I have ever felt was when I arrived at the point where I didn’t buy my gifts based on what people would think of me. You know the type I mean. That office gift exchange that you really don’t have the money for this year but can’t say no to because you wonder, “What will they think of me at the office?”

What about that expensive gift you really can’t afford but that you know your sister in law expects of you? You know she will say bad things about you to the rest of the family if the gift isn’t up to her standards.

Then there are the gifts like the ones for the trash man, the mailman or babysitter and, of course, you can’t spend any less than $25 on each child’s teacher. I mean what kind of person are you if you don’t give these people expensive gifts?

Then there are the obligatory gifts for those people whom you have only known for a month or two. Though you’ve only seen them once or twice in that time, they show up on Christmas Eve with a gift for you. Of course, you have to keep several presents on hand to give them.

I don’t want to sound like Scrooge but my point is that you have got to stop feeling compelled to buy gifts (or anything else for that matter) solely because you’re worried what others will think of you.

You don’t have to do what everyone expects you to do. Think about that for a moment. Just because something is expected of you doesn’t mean you have to do it. There is a difference between that and doing what you are responsible for, but that is for another discussion.

I know this is hard to do because we all want people to think well of us. Here are some suggestions to free yourself from worrying about what others think, especially in the area of gift giving:

First of all be a kind, considerate, respectful, good and caring person. You may be asking, “What does that have to do with giving gifts?” All year long I try to go above and beyond the call of duty with the people I work with, my friends and my family. I try to help them when I can, I treat them with respect and I try to do thoughtful things for them.

For example let’s use my good old trash man. If I have an extra amount of trash, I will make a point of running out and thanking him for doing the extra work. At other times, I tell him what a good job he does or I will call his company and tell them what a good job he does. Every once in a while, I bring him out a plate of cookies.

When Christmas comes, if I can’t afford to buy him a gift, he really doesn’t think anything about it.

Sometimes others ask me if I give my trash man a gift and, when I say no, they get a look of horror on their faces. I don’t worry about it because I know in my heart that I did the best I could. If the truth were known, my trash man probably appreciates the things I did all year long more than the one little “token” gift that they gave at Christmas.

Which would you rather have — someone who is nice and helpful to you all the time who might not give you a gift or someone who shows no interest in you all year and then gives you a token gift once a year?

Secondly, don’t make a big deal out of not being able to give a gift. Years ago when I was younger, a friend and I had to go to a business get-together where they would be serving alcohol. Neither one of us drank. My friend wanted to know what we should do if we were offered something to drink. I hadn’t even given it a second thought, so I looked at him in surprise and said, “What do you mean? We just say no thank you and ask for a Sprite or something.”

I didn’t make a big deal out of it and when I was asked what to drink I just asked for my Sprite. No one thought anything of it, but my friend hemmed and hawed about it and started apologizing because he didn’t drink. Then he went into details about why he didn’t drink and on and on until people were either embarrassed for him or thought there was something wrong with him.

He was trying so hard to impress the people for the sake of our business but instead he just made a fool of himself. We get so worried about what other people think that we tend to make fools out of ourselves and make a bigger deal out of something than it needs to be.

Take a moment to think how much you have spent this year on things to impress others, and not just at Christmas but all year long. Are you a parent who bought a toy or car for a child that you couldn’t afford but were worried that the child wouldn’t love you as much if you didn’t get it?

How many birthday gifts have you bought for your friends or your children’s friends that were more expensive than you could afford but you didn’t want them to think less of you or your child?

Many times, people have asked me if I was going to a certain Bible study or activity at church. When I said no, they asked why and I had to say I couldn’t afford it. but I didn’t spend money I didn’t have just so they wouldn’t think there was something wrong with me spiritually.

If you really think about it, you will be amazed at how many times we spend money we don’t have just to impress others. Like I said earlier, if you are kind, caring, respectful person who thinks more of others than yourself, people will see you and care for you alone and not what you can give. They will know that you give generously when you can and if you don’t there is a good reason.

You may say, “That is all well and good, but what about people that don’t understand and think poorly of me when I don’t give a gift?” I hate to be blunt, but what about them? Does it really matter what people who are uncaring and judgmental think about you? These type of people will always find something to judge or misunderstand no matter how hard you try to please them.

What I’m trying to say is don’t allow what others think to cause you and your family to go into debt, even if it is your own family and friends. This is peer pressure. We tell our children not to give in to peer pressure, but we give into it all the time and we wonder why our children fall into the trap of it. They see it practiced at home.

If you’re a little insecure about changing this habit, be careful, gain some confidence and if you are truly and honestly doing the best you can, don’t worry about what others think.

One last note: This doesn’t mean that you can’t or shouldn’t buy gifts for these different people that I mentioned above. If you have the money, then go for it. Also don’t be embarrassed to give a gift that is not so expensive. We offer ideas in our books and all over the web site about how to give very nice gifts for very little. Get the thought out of your head that if you can’t give something expensive you shouldn’t give at all.

I know that it might sound trite, but it is true. Some of the nicest gifts I received and the ones I enjoyed and appreciated the most cost very little or nothing. That little Elmo magnet my grandchild bought with his own money at a garage sale means just as much to me (even though I’m not really into Elmo) as the most expensive gift I ever received. I will proudly display my magnet and cherish it because it was bought with love and much thought.

It really is the thought that counts (not the price).