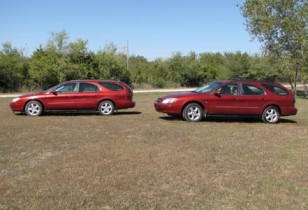 Well, this weekend we went out and bought a new car.  What’s so funny is that it’s the same EXACT car we have now. It’s a 2000 Ford Taurus station wagon.  Same year, same color, same everything but the fabric inside is tan instead of gray.  It’s strange too because you don’t see many red station wagons around.

We took the old car in to the mechanic and spent $400 on brakes and a a new sensor. While we were there, we saw the new car all torn apart. We asked if they were scrapping it because we needed a new piece on the trunk door.

The mechanic said, No, we’re fixing it up to re-sell." I told him we were looking for a minivan but to let us know because we might be interested in it.

When Mike went to pick up the "old" car, the mechanic said they were going to sell it for $4,000 and it has 41,000 miles!  We couldn’t believe it and told him we would take it!  About a week later, they were done and we now have a new car.

We were just in the "starting to look" mode, so we weren’t seriously considering buying anything yet but this was just too great of a deal to pass up. We had the cash and our old car has 150,000 miles on it. I think we can get around $2,000-$2,500 when we sell it.

We hope this car will be as good as the last one was.  I did try to get them to come down on the price but they wouldn’t (and it was priced right). Still, I said "I know you can’t come down on the price but would you swap the tires from the old car to the new one for me?" He said, "Sure!"  We had just gotten new tires on the old car not that long ago so I wanted to keep them.

Now we have a new car to get us around again. We did want a minivan but they are just way out of our price range right now. The station wagon will be great to drive all 4 kids around without the expense of a minivan.  The station wagon has a rear seat so we always joke about one of the kids’ teachers calling SRS because the kids say that they are "riding in the trunk". LOL

What Can the Average American Do to Save Money?

How to Deal With Layoffs