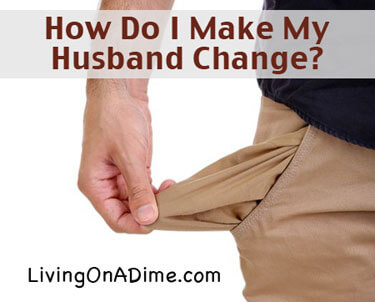 How Do I Make My Husband Change His Spending Habits?

Kristy writes: Hi Tawra and Jill! I need your help! I’ve been checking out your web site and reading your blog for quite a while now. I’ve also bought you book and subscribed to your newsletter. I’ve learned lots of useful tips from all those sources. I feel like I’ve come along way on my road to becoming a tightwad!

The problem is my husband. He’s not a complete spendthrift, however, we have a lot to work on. For example, we came home the other night and he turned on the air conditioner. I thought I was going to have a stroke! We were getting ready to go to bed. We have a ceiling fan in our room, and the night before we had both gotten chilly with just the ceiling fan on. Here he was wanting to cool the whole house! We live in the South, so I’m not opposed to using the air conditioner when we need too, but it was only 72 degrees! We ended up getting into a little spat over the whole thing.

There are other things he does as well. Like if he goes to the grocery store with me. I go with a precise list of what we need. I also have coupons to use. If he goes I end up buying much more than I had planned. He also gets so impatient that I’m not able to compare my coupons to the prices. I know the easy solution is to just not take him with me, but I don’t really like that solution. I want him to understand why it’s important to stick to the list, and why it’s important for me to take a little extra time to compare the coupons I have with the prices.

Whenever I show him the grocery receipt (when I’ve gone by myself) he’s always impressed. I guess what I’m asking is, “What can I do to turn my husband into a tightwad?” I read Mike’s conversion story and I think it’s awesome. So tell me, what did you actually do the facilitate his change? Did you simply put your foot down and say, No, we’re not spending money on that? I don’t really want to do that since he’s the one making the money.

I would just like to show him how great it is when we are able to spend less. Any suggests you have would be much appreciated. Thank you so much for all your hard work and advice!

Tawra: Kristy, First of all, congratulations on how far you’ve come in learning to spend your money more wisely. I can tell that you’re excited to see how much of a difference you have been able to make and that’s great!

I can appreciate your frustration. My husband was a liberal spender when we married. It took several years for him to change his way of thinking.

The thing that worked for us was that I led by example. When he saw me saving he was encouraged to do so too. There were a few times when I did say “there is no way we are buying that” and we got into some big fights over it. For the most part, I just saved the best I could. If he spent extra at the grocery store whenever we went, then I just went shopping without him. I had dinners and lunches made and ready so he wouldn’t be tempted to eat out.

He came up with a system where he put all our debt on a chart on the wall. He tried to predict how long it would take us to pay off the debt and drew a line indicating the debt paydown. As we would make a payment he would mark that month off. It encouraged him to see the debt going down and so he wanted to save more. Pretty soon, the reality was that the paydown in real life was better than the chart predicted. Men are visual and this “visual scorecard” really helped him buy in.

Another thing that helped was that he started calculating how many hours he had to work to pay for something. When he realized that it would take all of the money he earned in 1 1/2 years work for a new car or 3 months for a used one, we bought the used car.

You said in your letter “He also gets so impatient that I’m not able to compare my coupons to the prices. I know the easy solution is to just not take him with me, but I don’t really like that solution. I want him to understand why it’s important to stick to the list, and why it’s important for me to take a little extra time to compare the coupons I have with the prices.”

Regarding the list — You don’t always have to precisely stick to a list to save money. There are always specials and maybe you see something that sounds good and you just want to buy it. That’s ok as long as you aren’t overly impulsive. Generally, the more impulsive a buyer you are, the more you want to restrict yourself to “the list”.

If your husband doesn’t like to shop and if you spend more when he’s there, why do you insist that he goes with you? It seems like the best of all worlds is for you to shop without him. Why is it important for him to understand sticking to the list, and taking extra time to compare the coupons with the prices? Most men don’t like shopping. If he spends more at the store, but would rather not go, leave him home. Let shopping be your thing and let his thing be mowing the lawn or something else he does well.

One thing that can be difficult in a marriage is the tendency for a person to want to be in control. If you know what the easy solution is, but you “don’t like it”, it looks like you want to have control over him in the situation. You won’t get control over him unless you want a divorce. Marriage is a partnership and he has to be a partner.

Sometimes you just have to let it go. There were times when Mike would buy something that we really didn’t “need”. maybe he wanted to buy a CD or go out to eat, but I just let it go. He has to have control of the money too. Remember, this is a partnership not a competition. Think about “net gain”. Whether or not he understands how you shop, if the outcome of your shopping is a financial gain for your family, you have a joint victory. If you think of it that way, you will both feel like you’re on the same team (and you are ;-).

Here’s another angle on partnership. You said “Did you simply put your foot down and say, No, we’re not spending money on that? I don’t really want to do that since he’s the one making the money.” By saying that “he” is the one making the money, you are implying that your role in the marriage is not as important as his. You are “earning” just as much at home by doing all the things you do (meals, laundry, child care etc.), so don’t feel bad about sharing in the decision about how you and your husband spend the family’s money.

Because our financial situation was critical at the beginning, I did put my foot down. If you don’t have the money, you don’t have the money. Mike was used to going to the movie theater a lot and he liked to shoot a lot of pictures. He was in the habit of spending more when he was stressed or feeling low. When we started having trouble paying our bills, I told him that we would have to cut the movies and the picture taking. He didn’t like it and we had a lot of fights over those things, but he did understand that we were going to be in huge financial trouble if he didn’t stop spending.

Here’s a practical example of a way you can try to bring him on board without irritating him: Instead of getting upset (“having a stroke”) about the air conditioner being turned on, say “Can we try using the fans first and see if that will cool us down enough?” or “Let’s turn on the air conditioner for an hour or so and then turn it off”. There are many ways of compromising when it comes to finances. Try to use a gentler approach whenever possible.

You husband won’t change his view of money overnight, but if you can have a positive impact on your family financial situation and communicate how happy you are about the frugal “victories”, his thinking will change little by little. If, as you said, he is always impressed when you show him how much you saved, he is already starting to see the benefit! Hang in there and let us know how it goes!

Save Money by Reusing Things!
Next Post: Easy Gardening Tips