Most of us have heard that college is critically important for everyone, no matter how many student loans you take on. Is that really true? 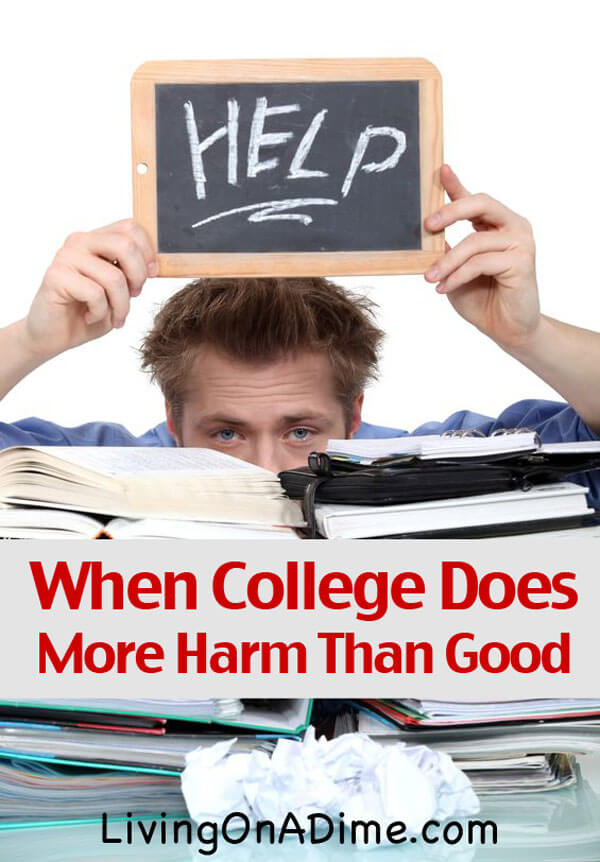 Jill,
I would love some advice… Although I can retire in 10 years, I went back to school recently and earned my college degree. All of my student loans are coming due soon and I haven’t found a better job yet. Right now I earn about $24,000 a year and I support my daughter and 2 grandchildren. (They live with me and my daughter homeschools them – and takes good care of me.) I want to get the loans paid off quickly, as I have paid off 2 credit cards and 2 vehicle loans – so this is the last debt to pay off. In your opinion, what is the best way to pay off the loans? I am not sure I make enough to pay on each loan monthly, but consolidating them into one giant loan might not be the best choice either…

Dee, unless you are going to get a lower interest rate, there really isn’t a reason to consolidate your loans. They still have to be paid. Sometimes there comes a point where you can only stretch your income so much and then you just have to do something to bring more money in. The only option I see for you based on the information you shared is to get a part time job and use all of that money to pay off your loans.

I don’t know your whole situation after reading just a few lines but maybe your daughter could get an evening job when you are home to help with the kids. If you are really serious about getting out of debt your daughter might have to stop homeschooling your grandchildren if you can’t afford to have your her staying at home and not working. I don’t have a problem with homeschooling or private schools but if you can’t afford to do it you may have to rethink that choice.

When you do pay off the loans, it is best to pay as much as you can to the smallest one first to try to get it paid off and just pay the minimum to the others. Then when the smallest one is paid off, you can apply all of the money you had been paying for that one to the next and so on.

The rest of the article isn’t for you but for others who are thinking about going to college and doing it on student loans.  We get nasty emails all the time for saying this but if you can’t pay for your college as you go then it’s better not to go! Your case is the perfect example of what can happen. It’s very easy to get stuck with the debts without the means to easily pay them back.

I hate to be a voice of gloom and doom but if you’re thinking of spending tens of thousands of dollars to go to school, be careful! Getting a college education used to mean that you were almost certain to get a higher paying job but things have really changed. It seems like higher paying jobs are getting harder to find and lower paying jobs are a dime a dozen. Getting a good education doesn’t always guarantee a great job. You’d be shocked to know how many people contact us with $100,000 in student loans but who are apparently unable to get jobs in their fields of study.

Years ago if a man was serious about going to school he would join the service and would be willing to sacrifice much and work hard to get his education. He worked first to save for his education. Now, many of us borrow the money first and hope we can get a good enough job later to pay for it.

Sometimes some people think “I deserve an education so I can have a better life and if someone else has to pay for it that’s OK because I deserve it.” We all want a better education but that doesn’t mean we can all afford to spend the money and we are ultimately responsible for the cost.

I don’t think there’s anything wrong with helping a person who comes from a poorer background and difficult circumstances, who spends most of his or her time studying hard, working full time and is willing to go to a less expensive school. These people are trying hard and being responsible and helping them may make a real difference. I do have problems with those who work the minimum amount required of them, spend their money foolishly and spend more time at parties, socializing and engaging in fun extra-curricular activities than studying. This happens more often than not with college students and a lot of times the parents are paying for it when they really can’t afford it.

Also if you are going to an expensive school because the name of the school will impress others, you really have a problem. It is the same as going into debt to buy a pair of designer jeans so you can impress others. If you don’t have the money to buy them then you shouldn’t buy them.

If you are going to college just to get a good education for a reasonably good job then you don’t need to choose an expensive prestigious college. (I do realize that if you’re looking for some specialized education for a specific job like choosing a law school, some more expensive schools might be a better choice.) In the same way that all jeans are made for one main purpose and that is to cover the body and both cheap jeans and expensive ones accomplish that, most colleges provide a reasonable enough education for the needs of most people.

So, once again, be very careful before you go into debt so you or your children can get an education for a better paying job. You would be better off spending the money for your child to learn a good trade first and then they can get an advanced degree later if they want it, after they have saved for it. 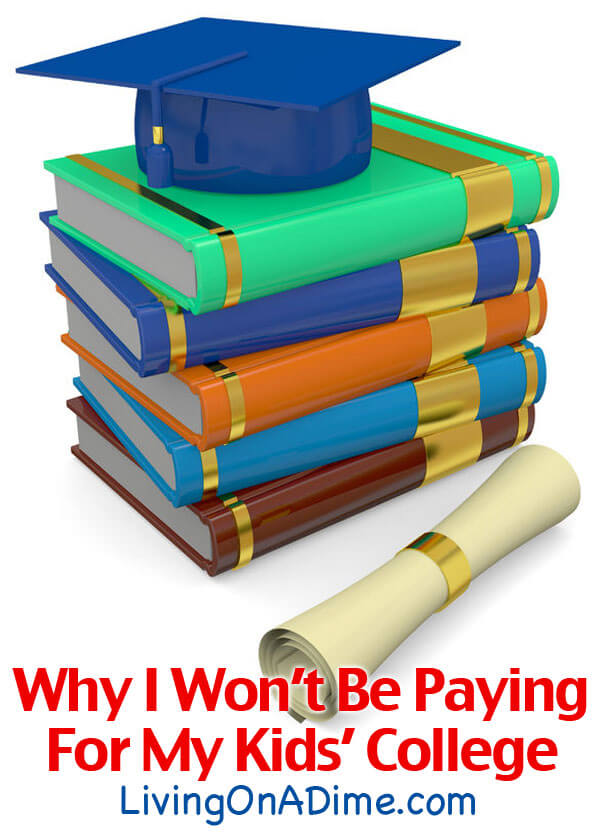 I was watching a morning show today and the hosts were talking with a lady who didn’t know what she was going to do because she owed $163,000 in student loans and was only earning $50,000 per year now. The “experts” helped her negotiate the student loans down to a lower interest rate, but there was no discussion about not choosing to incur this much debt in the first place.

If you can’t pay cash for college then you shouldn’t be going! Period! Frankly, I’m tired of hearing people whining about how they just “can’t” pay for their student loans after the fact because they aren’t earning enough.

People really need to consider the cost and the benefit of the education. If you’re spending $100,000 in students loans for a degree in social work for a job that only pays $19,000 per year, you’ll be spending the majority of your career paying off the loans, which will make it very difficult to live the life you will want to live. It doesn’t matter how much you like the job, eventually you’re going to get tired of paying a premium price (cost plus interest) for something you received many years ago.

When most people borrow, they also neglect to consider what happens if they change their minds. Many people have contacted us who borrowed huge sums of money for a degree, committing themselves to 10-20 years of payments only to decide after college that they hated the chosen career fields or that they wanted to be stay at home moms. Others conclude that they will simply not be able to get a job in their chosen fields. By then the money has been spent and it must be paid back. Often these people are left with the substantial debt and without the job.

Why is it that people think it’s OK to carry student loans on their backs for 10-20 years but they don’t think it’s reasonable to take 6-8 years to go to school part time while they work to pay cash for it?

Most college students are younger single people looking forward to a career and a family after college. It is much easier to sacrifice the time and extra effort when you are still young and single rather than to borrow money, promising to pay it back with interest later at a time in life when you will have much more financial pressure and greater family responsibilities.

If you are a parent and feel the need to help your kids pay for school that’s fine but all your debt should be paid off first, including your house. If your house and debt is paid off, then you will have the extra cash flow to help them pay.

If you’re planning to go to college, look for ways to save money. Start at a less expensive junior college to get the basics at a lower cost before transferring to a university. Work to get scholarships and grants that don’t have to be paid back and yes, go to college part time so you can work full time to pay for school and your living expenses.

Stretching Your Food and Reducing Waste
Next Post: 10 Ways to Lose Weight and Gain Money