When Should You Buy A Newer Car? 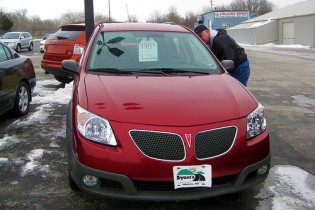 Michael from Wilmington, NC asks: When should you get rid of an old car that is paid for and buy a newer one that would hopefully have less maintenance cost. I am assuming the new car would be paid for outright without credit expenses.

Michael Answers: That is a good question. We recommend buying cars outright with no credit debt and then driving them until they die completely or until it is no longer practical to keep them. When we buy cars, we like to pay cash and we generally pay $2000 to $6000 for the newest low mileage used car when can find. Our last two "new" cars were a 1991 Buick Skylark we bought in 1998 with 50,000 miles for $2500 and a 2000 Ford Taurus station wagon with 59,000 miles we bought in 2004 for $6000. We paid more for the Taurus because it was only four years old, it was in really good shape and we thought it was worth paying a little more for the car Tawra and the kids would be using regularly. (We also hoped it would last a little longer than some of our previous buys).

When we buy a used car, we usually choose well enough that it needs very few repairs in the first year or two. Generally, we expect to pay regular maintenance costs (new tires, oil changes, brake pads, etc.) no matter what car we drive, so we usually don’t count those expenses as "repairs". We will continue to drive the car, making regular repairs until we begin to get the sense that its life span is coming to an end. When we do have to make repairs on a car, we consider it reasonable to spend several hundred dollars a couple times a year to keep it going. This might include replacing a water pump, doing major brake work or general engine work.

Usually, a catastrophic repair (like a new transmission or a new engine) is the death nail for one of our cars since our purchase price for a replacement is usually low. Occasionally, we will fix a catastrophic repair if the car rarely needs work and if we have not had the car very long. Here’s an example where we did that:

Once we received a used car as a gift from family after I crashed a car on an icy road. Two weeks later, the transmission failed. Since the car was new to us, didn’t cost us anything and seemed to be OK otherwise, we went ahead and spent $2000 to fix the transmission.

Most of the time, a car needs only occasional repairs, but over time, the frequency of repairs increases. When it seems that the number of repairs is on the rise, we try to figure out whether or not we think it is a trend. If so, we think of the car as "on its way out" and stop making unnecessary repairs. If we have decided that a car is "on its way out" and it requires a single repair over $500, we will usually consider it dead and replace it. If the car that is a short timer needs several lesser repairs over several months that begin to add up to a lot of money, we will usually get rid of it and get something else.

We still continued to do regular maintenance, but avoided spending a lot of money on repairs that were not critical. We got a crack in the windshield that was a little bit annoying, but since it was only around the edges and Kansas law did not require us to replace it, we decided not to repair it at the time. Again, we were pretty sure the car was on its way down hill. The heater started to occasionally smell like anti freeze which made me think the heater core was going to fail in a year or two. We started to notice that the paint was peeling from the rear fenders, but because we didn’t think the car was going to last a long time, we decided not to re-paint the car. We still made some regular repairs, but eventually, the car had a brake failure that was difficult to put a price on. We had already spend $500 in the previous 3 months for regular repairs above general maintenance and it appeared that the brake problem could cost another $300-$400. At this point, we decided that the white car had exceeded its useful life, since we would have spent $900 in just a few months if we repaired it and we would still have had a car with a cracked windshield, a dying heater core, peeling paint and other problems that we had not yet discovered.

You will want to consider where your car is in it’s useable life. If you want to keep your expenses low, always remember that a car’s basic purpose is to get you from place to place reliably. You can keep more of your money if you’re not driving the car to impress other people. We usually try to keep the cars looking presentable, but we normally go for clean "plain Jane" cars that run well. All major systems should work well. We live in Kansas, where the temperatures are often over the 100° mark in the summer, so we think that Air Conditioning is a must. When we lived in Colorado, we considered it more of an "option".

When it is clear that a car no longer fulfills it’s basic purpose: to get you from place to place reliably within a reasonable budget, it’s time to get another one.

You are wise in considering a newer "used" car when you replace an older car. Usually, you get the best buy on a car that is new enough to need few repairs, but old enough to be relatively inexpensive. You have to shop around to make sure that you find a good used car with no signs of trouble and it is wise to have a mechanic check it out of you don’t know much about cars.

Brand new cars cost more than they are actually worth, so it’s best to let someone else take the financial hit of being the first buyer of a car. Some people buy brand new cars expecting to "save" on maintenance costs and repairs, but all cars require occasional maintenance and repairs and parts for new cars tend to be more expensive.

If you still think the new car is worth it, don’t forget that the new car will cost you more in insurance and registration fees and after two years, you will probably be putting money into repairs on top of your monthly payment. It’s something to think about.