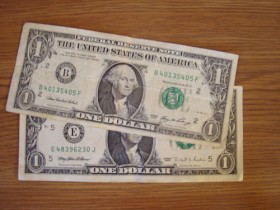 What can the average American do to save money?

I had a reporter from CBS News call me today asking how average people who are living paycheck to paycheck can get a savings account going.

I told her that one of the first things they can do is stop eating out. She later told me, “Well, you hear the stop eating out thing all the time. I want to know what normal, average people can do to save money who are living paycheck to paycheck.”

Most “normal and average” middle class Americans who are having to live paycheck to paycheck aren’t doing so because of something unpreventable like medical costs. They are doing it because they are spending more than they earn on stuff they don’t need.

What are some of the areas where you can save?

Stop eating your way into debt! Yes, families do spend literally THOUSANDS of dollars a year eating out. Add it up. You will be shocked. If you only go out once a week you will spend almost $3,000 in one year. We had one reader email and say she and her husband stopped eating out and saved $22,000 in one year!!!

Too much stuff. Stop shopping. I spend $350 a year on clothes for our entire family. How many clothes do we need? We don’t need that many clothes and I buy most of our clothes at thrift stores and yard sales. Stop shopping just to have something to do.

Too many activities. It’s not abnormal now for people to have kids in two or three activities per week each. That’s crazy! Let them do ONE and one only. You will save money on the fees, gas driving there and eating out because you “don’t have time”. The “average” family will spend $300-$500 a month on activities for just one child.

Cars– Stop buying new cars you can’t afford. Why are you buying a car for $30,000 when you earn that amount in a year? Add up the interest, extra insurance and taxes. It does add up to that much. If you can’t pay cash, you shouldn’t buy a brand new car.

Treats– You don’t need a Starbucks coffee or other “treat” every day.

Electronics – We now have convinced ourselves these are needs and they aren’t. Unless you make your livelihood with them you don’t need them – even a cell phone and especially a cell phone for every member of the family. Out of curiosity I was watching a home shopping network the other day. They were selling big screen TVs. In just a few minutes of time they have sold out of over a million dollars worth of  these TVs. We are talking $1500 for a TV. Oh my, poor us and these hard economic times.

Housing– Why do you have a 3000 square foot house for a family of four? Get something smaller that you can afford and doesn’t cost as much to heat.

Now, you may not be in this boat and if you’re not then congratulations, but a LOT of middle class paycheck to paycheck Americans are. It’s time to stop whining about the “bad economy” and start taking some responsibility for your finances.

Previous Post: « How to clean laminate floors – Homemade Floor Cleaner
Next Post: How To Eat A Healthy Diet For Cheap