Save Money On College Textbooks 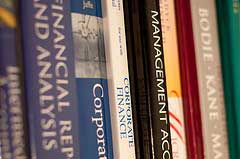 Recently, I wrote an article on college loans. Here is one tip about how to save when you’re in college. As soon as school is out, sell your old books. I don’t know why college texts are one thing we want to always cling too. We save them for 20 years or more, move them 10 times and don’t look at them once. So sell them while they are “newer” and worth something. Now information is updated and changed so fast that the info in a textbook can become dated quickly so there really isn’t any reason to keep them with the idea you will need to look something up.

I have always moved my furniture myself but one time I thought about hiring someone to do it. I called to get information on it and after talking to the people I found out something really interesting. They said that one of the things people save and move the most is old books and magazines. They also told me that because books and magazines are very heavy, they are very expensive to move since most moving companies charge by weight.

P.S. Too funny! As I was looking for a picture to use with this post, I found the above picture. Without realizing it until after I had picked it, I noticed the caption below it said, “I don’t know why but I have a hard time getting rid of my old textbooks. I keep thinking one day I will reference them but I haven’t in all these years but still I keep thinking I will even if I know I won’t.” It’s a shame that I can’t send him my post. :-D

From Mike: You can sell your college textbooks and get a relatively large amount of the money back as long as you sell them right away after the semester is over. If the classes are calling for the same textbooks the next semester, you can usually get quite a bit for them, but if you wait too long, the colleges will call for a newer edition of the book, which renders old ones relatively worthless.

When I was at the university, our bookstore would buy back books for something like one third of their retail price. I discovered that they would also sell used textbooks at half of the retail price, so I would buy them used at the beginning of the semester and sell them back right after the semester was over. Doing this, it cost me a sixth to a quarter of the price of buying new textbooks.

A couple of times I kept textbooks and I always regretted it later. They just cluttered my life and when I did eventually get rid of them, they had lost all their value…

Do you have any ideas about how to save on college textbooks? Comment below!