Get 30% OFF Dining On A Dime print books and all e-books!
Use Coupon Code CHRISTMAS
Learn More Here!

You can make fresh, delicious homemade bread! These step by step instructions, homemade bread recipes and easy tips will help you learn to do it! 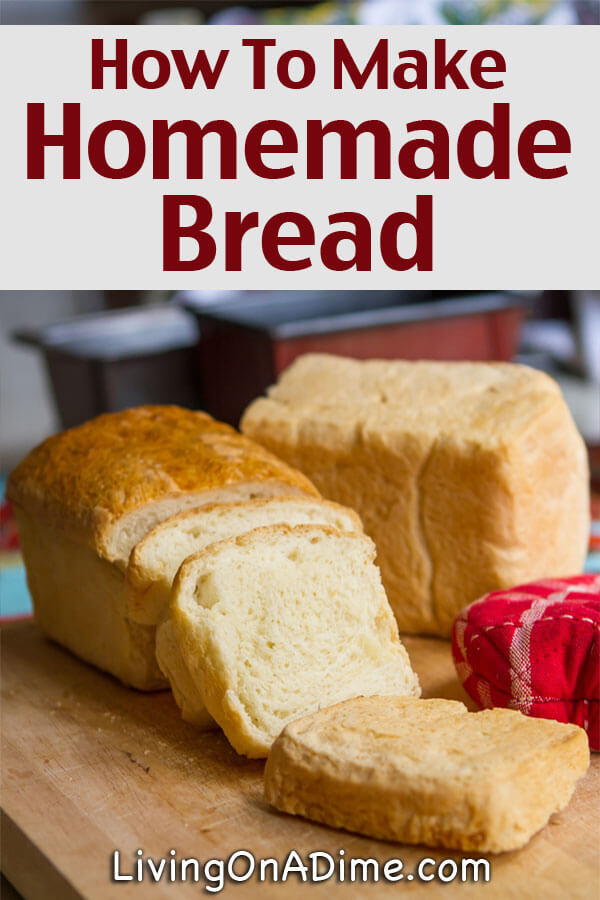 We get so many questions about how to make homemade bread, so I thought I would try to answer just a few of them today. Don’t let all this information make it seem too involved and scare you away from making bread. Once you get used to it, it really isn’t a whole lot harder to make homemade bread than it is to bake a cake. Just read the information and then follow the recipe step by step.

I once read a book by an older woman on how to bake a pie. She said bake one every day for 2 weeks and at the end of that time you will know how to bake a pie. That rule applies for many things, including bread baking. Things may seem a little awkward or difficult at first, but after you have made it 14 times you will have learned what not to do and will get comfortable with it. There really was a lot of wisdom in what that older woman said.

We didn’t put my favorite recipe for homemade bread in Dining on a Dime because it isn’t quite as frugal as others, but I thought some of you might like it now. Also, I will give you my grandmother-in-law’s very frugal recipe.

Before I share the homemade bread recipe, here are some useful tips on baking bread:

Here’s my favorite homemade bread recipe. It is a cinnamon bread but when I want to make regular bread, I just make it into loaves without spreading the cinnamon and sugar on it. This makes 2 loaves of bread.

Mix 2 cups flour with sugar, salt and yeast. Put the milk, water and margarine in a large mixing cup and heat in the microwave to 120° or until it feels really hot when you put your finger in it. (The margarine doesn’t need to be melted.) Gradually add to the dry ingredients. Add the eggs and 1/2 cup more of flour. Stir in enough additional flour to make a stiff dough.

Turn on to a lightly floured board and knead until smooth and elastic (or you can knead it in the bowl). Place in a greased bowl (It sounds strange, but I use bacon grease), turning to grease the top. Put in a warm place (like I mentioned above) and let it rise until doubled, about 35 minutes.

Punch down and divide into 2 halves. Roll into a 14×9 rectangle. If you are making regular bread then, beginning at the 9 inch end, roll as you would a jelly roll, gently making it into a loaf. Divide and place in 2 greased(with bacon grease for added flavor, no it won’t taste like bacon) 9×5 bread pans. Let rise again for about 35 minutes until doubled. Bake for 45-50 minutes at 375 degrees. To see if it’s done, thump with your fingers. If it sounds hollow, it is done.

After you have rolled the dough out, spread it with a thick layer of margarine. Then sprinkle with sugar and cinnamon and roll as above. Be sure to tuck the ends under so the goodies won’t ooze out.

This is a good frugal homemade bread recipe and is a great one to use when you are short of ingredients because it doesn’t call for things like milk or eggs.

This recipe was written the way we did it years ago, with just the ingredients and minimal instructions, so I hope you can figure it out OK. As you will see this, recipe breaks most of the rules I explained above, but her bread was always great.

You might also notice she did most of her kneading and working the bread in her bowl instead of dirtying a counter. Tawra makes her bread this way and it works great every time.

Sift flour into the above mixture, stirring until it is too thick to stir. Then work with your hands, adding flour as needed until it becomes a very stiff dough and won’t stick to your hands. Place in a greased bowl, turning to coat the top. Set in a warm, draft free place about 1 1/2 hours. (This is why I like my oven method for rising.)

If you like these homemade bread recipes and tips and would like to learn to make other homemade foods, check out our Dining On A Dime Cookbook!

How To Save Money On Toilet Paper – Which Toilet Paper Is Cheapest?
Next Post: 10 Easy Homemade Bisquick Recipes