A while back, extreme couponing was the popular thing to talk about, but for the rest of us, is using coupons even worth it? Here are some things to consider about using coupons and how the might not really be saving you anything. 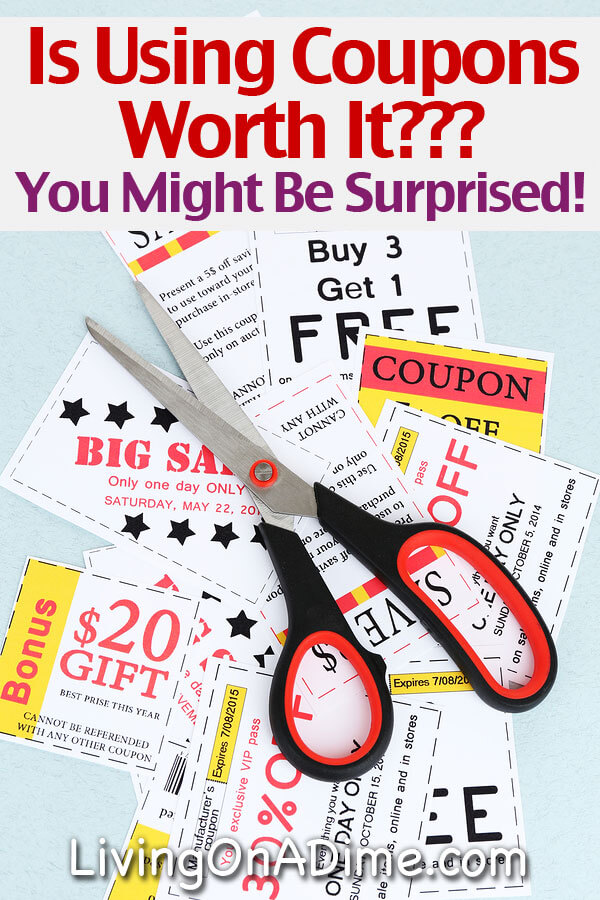 Is Using Coupons Worth It?

“I recently saw a special on the TLC cable channel called “Extreme Couponing” where people use coupons to stockpile grocery items, which they get nearly for free. I would love to hear your thoughts about it.”

I have seen that show. I have no problem with using coupons even though I sometimes sound like I don’t like them. As a matter of fact I used to be an “extreme” couponer. I would go the to store armed with my coupons and would often get my groceries for free or for very very little money. I loved it. I would even get a “high” from it and be so excited. I could hardly wait until the next time I went to the store so I could do it again.

It wasn’t until years later when I couldn’t get coupons anymore and lived in a town where I couldn’t use them that I realized the stress I had been under while I was using coupons and the effect it all had on me while I was doing it.

I don’t have a problem with couponing but extreme couponing has me concerned.

Let me pause right here and say please don’t e-mail me and say, “You don’t know my situation. I don’t have a problem with anything you mentioned and I coupon all the time.” That’s fine. There are exceptions to my rule and you might have circumstances in your life that make it easier for you to engage in extreme couponing so, if this describes you, I am not talking about you.

I am talking to the thousands who feel guilty, like they are failures in some way because they don’t jump on the bandwagon and start clipping every coupon in sight. When riding on a bandwagon you can run into lots of potholes, which advocates of something don’t always tell you about.

Most things, when done in the extreme, are not good. You have to have balance in life. What happens to a set of scales when you add way to much to one side? It can cause the scale to topple over, creating a chaotic mess.

Here are some things I found out about extreme couponing in my own life and from watching others:

These were just a couple of the little things that made extreme couponing stressful at the grocery store itself.

At home, before I left, I would spend ages clipping and sorting my coupons, putting them in order to make the shopping easier. Then, when I came home and found I had bought something without a coupon or had forgotten to give them a coupon, I would be so upset at myself.

I didn’t realize until after I stopped doing extreme couponing how much it controlled me emotionally. It was like an addiction.

On the show you don’t always get all of the real information. They don’t add all of the expenses to give a true amount of the savings. For example:

I paid almost $100 a year for a newspaper subscription to get my coupons. (Yes, I know you can get the coupons free off of the Internet now but I am talking about adding up the expenses and the newspaper happened to be one of mine).

On one extreme couponing show, two people took a day off of work just to go shopping. If they make say $20 an hour that was $320 they lost from not working. If they saved $920 on groceries you have to subtract the $320 and that meant they only saved $600.

A lot of those people buy coupons off the Internet. If you do this, you should subtract that cost from your savings.

You should also add in the hours you spent organizing, clipping, searching for or printing the coupons. At different times, I have made $25 an hour on my business so if I spent 4 hours couponing instead it would cost me $100 from my business. You have to take that off of the amount saved or you’re fooling yourself about the savings. Yes, I know a lot of people clip coupons in their spare time and if you truly have so much spare time that it’s worth it then that’s ok. In that case, it’s like working another job.

It may sound exciting but, like so many things, it can get out of control.

One couple had enough deodorant for more than 100 years. I know some people give it away but it still took lots of time, energy and thought to deal with all of that deodorant. Then the people had to pay for shelving to store it (another expense), they had to insure it (more expense), sort it, stack it, put the newer things toward the back, etc. They went to all of that effort for deodorant they probably won’t even use.

There is an old saying– Beware of things that sound too good to be true. At the risk of sounding negative, there really are very few “free” things in life. There usually is a certain amount of work involved.

Lastly, I hate to have all of my eggs in one basket. I learned how to shop on clearance, how to shop at Aldi and how to stretch the food I did buy and not waste it. That way, if I couldn’t use coupons, I had other means of saving.

To save a LOT without using coupons, check out our frugal family cookbook: