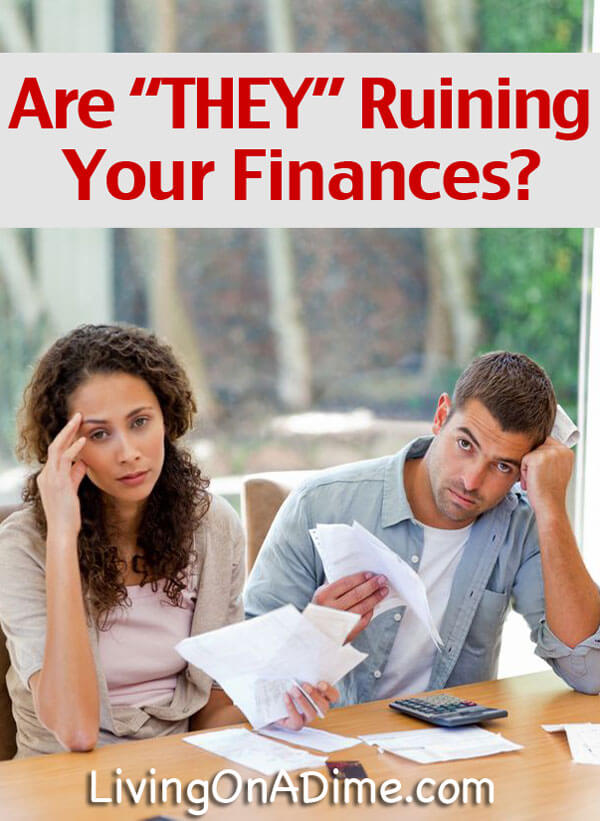 Who Are They And Are “THEY” ruining your finances?

Over the centuries, human beings have been compared to sheep over and over again. I never cease to be amazed at how true that is. If one sheep decides to head down a road that goes right over a cliff, they all follow. Even in history when people march and demand the right to be individuals they still always seem to dress and act alike. I remember the “flower children” of the 60’s. Even with their “free to be me” attitude, they were horrified if a man walked in with a suit and tie, since it was different from what they and their peers would wear.

If children are doing drugs, drinking or just wearing strange outfits, they justify it because “everyone is doing it”. So often, the parent’s response is “If everyone jumps off a cliff that doesn’t mean you should do it, too.” Is that the story we tell them with our actions? Kids are very shrewd and have no tolerance for hypocrisy. We hurt our families and ourselves if we blindly follow the crowd. “They” have set a standard of living that we must live by– no matter what the cost. (I still haven’t figured out who “they” are but I don’t think I like “them” or “their” ideas.)

“They” say you can’t live on one income so many moms, who think it’s best for their families if they stay home, get jobs anyway because “they” say, “You can’t make it!” Never mind that the extra expense of child care, work clothes and (for many) “guilt offerings” purchased for their kids often exceed the extra income. “They” say that’s the way it’s supposed to be.

How many dads have become only figures the kids wave good-bye to in the morning before heading off to two jobs because “they” say this is the world in which we live. Too many people who do this find that later in life their marriages are suffering, their kids are rebellious and resentful of their absence and the employer for whom they’ve worked, investing all their time “providing” for the family lays them off.

“They” say you have to pay to send your children to college so they can become a success and make a lot of money. When did “they” come up with the idea that going to college makes a person successful? How many parents have accrued $40,000 or more in debt for their son or daughter’s degree, only to find the student working in a field that has nothing to do with his degree? A college education can certainly be a useful tool, but it is one that is wasted if the student doesn’t need it or fails to use it.

I find that the most successful human beings are those whose parents spent time with them and had the time to teach them values, self confidence, self reliance and love. You can always lose your stuff, but you can’t lose your values or the knowledge that your parents love you.

Stop basing your financial decisions on what “they” think you should be doing. Financial worries are the biggest cause of stress for Americans, leading to all sorts of physical and emotional problems. These worries are almost always avoidable, but many choose the worries over the common sense.

The point of this story is not that you should never spend any money on anything. The point is that it is important that you decide whether or not spending your time or money some particular way is a good idea for your family. Keep in mind that when “they” tell you you should do something, “they” are often trying to sell you something you don’t really need.

Whenever you find yourself reflecting on your life and you realize you are doing something because “they” expect you to do it, tell “them” to butt out of your life, decide yourself what is really best for you and your family and do it!

If you often wonder where all of your money goes or if you need a more frugal mindset, check out Dig out Of Debt and learn more about how to keep more of your money.