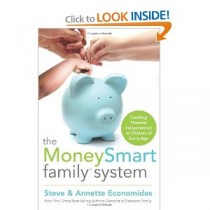 The “experts” at the USDA in their 2010 report “Expenditures on Children and Families” say that we should expect to spend about $261,000 to raise each child from birth through age seventeen ($14,500 per year). Do you think this is accurate? We don’t! In 2009, according to the U.S. Census Bureau, the median annual household income fell to $49,777. Meaning that it could take more than five years and three months of your entire gross household income to get Junior through the formative years and ready for college.

Just calculate with us for a minute. If you’re an average family with 1.8 children (according to USDA figures, this alone should cost you $26,100 per year), living in an average city, spending an average amount on food ($200 per month per person x 12 months = $9,120 per year) with an average yearly household income ($50,000 per year—about $40,000 after taxes), you’d be left with $4,700 a year ($392 per month) to spend on cars, clothes, housing, debt, recreation, gifts, utilities, health care, cell phones, cable TV, medical bills, dental bills, and chewing gum. Something simply doesn’t add up!

If you’re going to survive financially and have any money left to retire on, you’re going to have to draw a line in the sand with what you’re willing to spend on your kids.

Many parents think that they have to provide their kids with the best things in life. But we’ve discovered that giving our kids the best things, often means that they will expect us to continue to do that . . . indefinitely. But teaching them to pay their own way, starting with smaller expenses from the youngest ages, will produce an abundance of benefits as they exercise their own mental and financial assets to resolve their wants and desires.

At the very least, parents ought to allow their children the privilege of sharing some of the cost of the things they want. But the truth is, the more our kids invest in their own financial decisions, the more they’ll value and care for what they buy. When parents pay for their kids wants and desires, they’re actually stealing valuable financial growth opportunities from them.

While parents may bristle at some of our suggestions, here are 10 things they should never pay for!

Oh, and a couple more things parents simply should never pay for . . .

You’ll never regret allowing your kids to stand on their own two feet financially—it pays great dividends to them and . . . protects your dividends for retirement. It’s never too early, too late, or too hard to start teaching and learning financial responsibility.