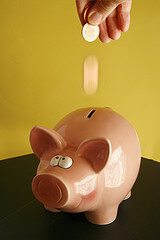 Since then we have had more debt and paid it off/are still paying it off. Here is the rest of our story: When we lived in Idaho, Mike ended up working a job 100 miles from home. Because his new job was so far from home, we decided to sell our house intending to move closer to his job. We had the house on the market for 3 1/2 years while living in Idaho (from September 1996-January 2000). Mike got laid off from his job in October 1999. In December 1999, despite the layoff, we paid off our debt, the last of the original $20,000 .

Mike looked for a job until April 2000. He couldn’t find one in the area and we couldn’t sell our house. We finally decided to leave the Pacific Northwest and move to Manhattan, Kansas to be closer to my brother. He and his family lived 2 ½ hours away in Wichita and needed help remodeling their home. We had to leave the house in Idaho vacant and hope that it would sell eventually. (Mom was still living in Idaho and she was also trying to sell her house to move back to the Midwest.) Until it sold we had to pay $400 a month for the house, even though we didn’t live in it.

The rental market was not good in the small Idaho town and renting the house would not have come close to paying the mortgage and expenses. We paid for our moving expenses from Idaho which came to $2,500 and included deposits for our rental house in Kansas and other related expenses.

At that time, we had two kids, one and two years old. For a while, we were stuck with two house payments: $400 per month for our house in Idaho and $500 monthly rent in Kansas. Mike worked a job making $9.00 an hour so, of the $1500 we earned each month, almost three quarters went to making house payments. We had $600 left for everything else.

Mike’s county government job didn’t have health insurance benefits. We did get some WIC for 9 months and put the kids on state medical for a few months but we didn’t get any other assistance. Our house finally sold in 2000. We sold it for $12,000 less than we paid for it because we realized that it would probably cost less to take the loss at that time than to keep paying the mortgage and getting further into debt. We had to write a check to the buyers for $8,000. To say it made us sick to our stomachs is an understatement!

The two rental houses that we had from April 2000-April 2001 were horrid, but with two house payments, we could not afford better. It was so incredibly stressful living in houses that the landlords didn’t want to maintain. Our family was also very sick much of that time. Not long before moving out of the first rental, we discovered mold growing around a pool of water in the crawl space under the house. In the second house, a six inch baseboard fell off the living room wall one day and the back side was covered edge to edge with black mold. God was so good. When Mike got his job in Wichita, we found a 1600 square foot two bedroom house in Wichita that had been recently remodeled. It was even the exact colors that I wanted on the outside!! It’s funny because God really does give us the desires of our hearts!

We didn’t have a down payment and we had $10,500 in debt so we had no clue how we were going to buy it. We soon found out that there was a new program that helped people get home loans for 0% down and roll closing costs into the loan, so we bought the house. We were so excited to have our own place again! Our moving expenses from Manhattan to Wichita were $1,000.

Over the next two years, we had several other large expenses that we couldn’t afford. Mike’s job was not working out well and he was frustrated that he wasn’t earning as much money as we needed. He wasn’t sure he wanted to stay in the video business anymore because the financial outlook for video producers in Kansas wasn’t great. He opted for career counseling which cost us $1,200. Our washing machine and refrigerator both died shortly after we bought the house. Total cost $1,000. Both of the cars needed major repair work in one year, which cost $2,500 more than we had.

When baby #3 was coming along, we bought another house with more bedrooms for about the same price. Almost immediately, the refrigerator died in it, costing us $900.00. We got all that paid off ($17,000) in August of 2003 and again had no debt except out mortgage.

Then in December 2003, one of our cars needed a repair that would have cost more than buying another car. We bought a used Taurus station wagon on Ebay for $6,000, financing it on a credit card at zero percent interest. After our 3rd child was born in 2003, we incurred major medical bills because he had food allergies that went undiagnosed for a year. We spent $3,000 while we were trying to figure out what was wrong with him. We also had to pay cash for all our prescriptions (Thank the Good Lord for Canadian drugs ;-) because our insurance didn’t have prescription coverage.We were paying about $300 a month cash for prescriptions. If it wasn’t for Canadian pharmacies, we would have had to pay over $800 for the drugs here!

We didn’t pay off the debt as fast the second time for several reasons: Our medical expenses did go up around $500-$1500 depending on the year. We also had the baby on special formula that cost over $200 a month for one year, because of his food allergies. When we moved from Idaho to Kansas our:
Utilities went from $75 to $200 – up $1500 a year

House payment went from $625 per month in Idaho to $800-$900 per month in Kansas – up $2100-$3300 a year, both because of a stronger house market in Kansas and because our family was larger in Kansas Food went from $125 to $250 – up $1500 a year We also have purchased more convenience items than during the first big debt payoff because I have been sicker than usual for the last several years. We didn’t buy a lot of convenience stuff, but we did buy more $5 dinner take out from the grocery store and a few things for the house to “make life easier”. These costs did not add to the debt, but they did make the debt payoff take longer than before.

Our debt as of Summer 2005: This is what we still have to pay off: $6,000- Most recent car replacement $3,000-Extra medical bills (June 03-Jan. 05) By the way, in case you’re wondering why we haven’t received much income from the book business, it is largely because I am only able to work a few hours a week on it because I am chronically ill and, unfortunately, books don’t sell themselves. We are making changes to the publishing business and hopefully we will be able to make more income from it. Anyway, that is the rest of the story. Tawra

Update 2010- at this point we are completely out of debt except our house, which we are working to rapidly pay off in 3-5 years. Mike is currently working full time for Living On A Dime. It is doing better, but he still works 2 other part-time jobs to bring more income. Tawra

Breakdown Of Debt Reduction
Next Post: Should We Declare Bankruptcy?