This homemade Vick’s vapor shower discs recipe is quick and easy to make at home. You’ll also find great tips to make someone with a cold more comfortable. 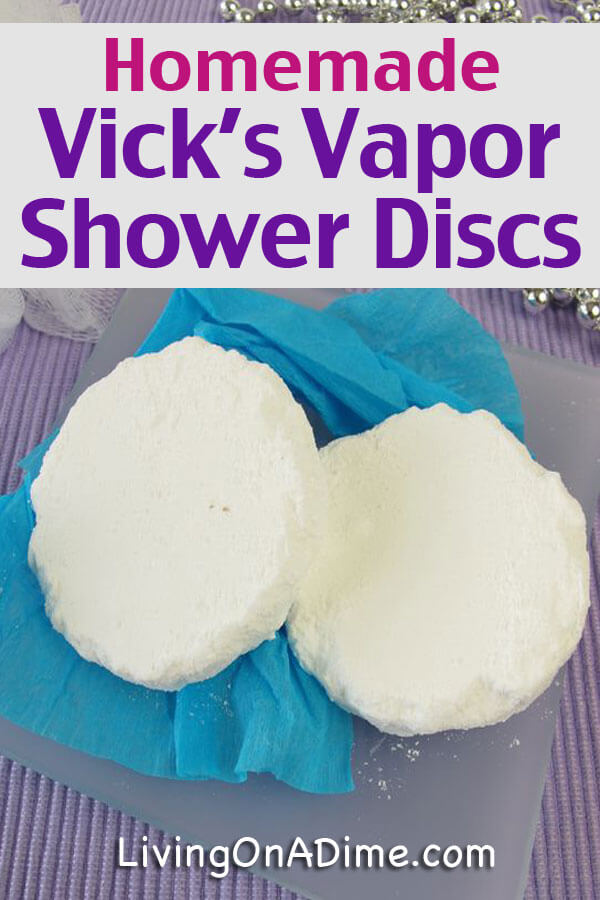 Have you seen those Homemade Vick’s Vapor Shower Discs you put in the shower to help with colds? They are expensive! Cold season is upon us and unfortunately, chances are that either we or our children will come down with a miserable cold. Even though I am not a doctor, here are a few things that can help make you more comfortable and hopefully feel better. We’re also including a recipe for Homemade Vick’s Vapor Shower Discs.

We first saw this recipe for Homemade Vick’s Vapor Discs over at Frugal By Choice. There is also a similar recipe in our Dining on a Dime Cookbook for homemade bath bombs, which you could also use in the bath. Instead of using the Homemade Vick’s Vapor shower discs in the shower, you can also use a combination of eucalyptus, rosemary and lavender for a relaxing and healing bath.

Mix using enough water to make a thick paste. You can pour into muffin tins lined with papers, make small balls and set on a plate or put into a silicone ice cube tray or muffin tray. Let them set for at least 12 hours or overnight to AIR dry on counter.  Remove from papers or silicone trays and store in an airtight container.

When ready to use, place a disc on the floor of your shower and let the water run on it while showering.

*Essential oils can be expensive. If you don’t want to buy a lot of oils for this recipe, you can buy 1 bottle of the generic vapor rub and just use a couple of teaspoons in this mixture instead.

**You can leave the cornstarch out of the Homemade Vick’s Vapor Shower Discs. I put it in because it helps hold them together better.